Fanney Khan Trailer: Anil Kapoor Is Chasing A Dream And Aishwarya Rai Bachchan Is Living It 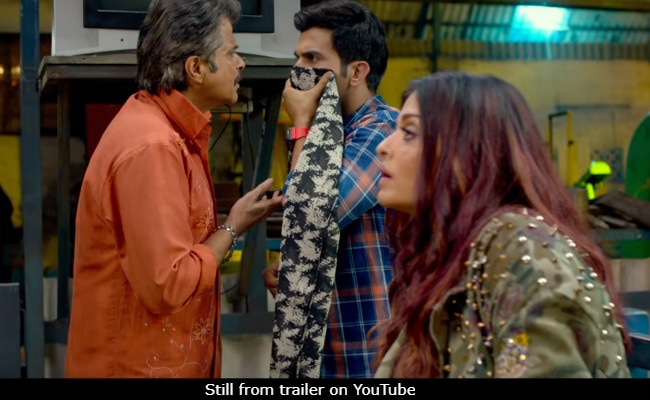 Will Anil Kapoor AKA Fanney Khan's dream to establish his daughter as a successful singer come true? We don't know but the trailer of Fanney Khan sure does reveal that he leaves no stone unturned to help daughter Lata Sharma become the next Lata Mangeshkar! Lata, played by actress Pihu Sand, appears to be a brilliant singer but reality platforms are not ready to acknowledge her talent because the idea of body-shaming steps-in. Lata, who is visibly overweight, is dismissed as "fat" when on stage and made fun of her name Lata at a reality show. She even gets a jazzy dress to steal the spotlight while performing but nothing works.

Fanney Khan resides in a congested Mumbai chawl with limited space and financial constraints. A disheartened Fanney Khan plans to invest all his savings for a new record for Lata but the idea is vetoed by his wife Kavita, played by Divya Dutta. She too believes Lata has no future in the entertainment business. Enters Baby Singh, the super famous singer played by Aishwarya Rai Bachchan. She's famous, Lata's favourite and rich, hence, Fanney Khan devises a plan to kidnap her for money to fund Lata's dreams. Fanney Khan's partner in crime is Adhir (played by Rajkummar Rao), who is moonstruck by Baby Singh and behaves least like a kidnapper during the act.

However, in the course of things it appears that Fanney Khan, Adhir and Baby Singh turn out to be buddies. But will Lata Sharma become the next Lata Mangeshkar? Only the story of Fanney Khan will tell. The trailer also introduces Fanney Khan as a celebrated musician of a Nineties orchestra.

Directed by , Fanney Khan is all set to hit screens on August 3.