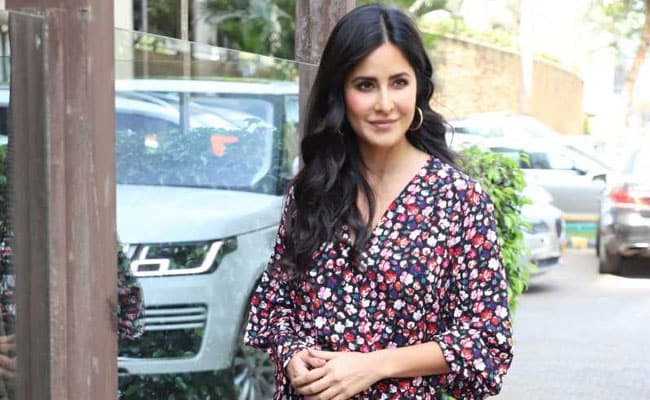 Katrina Kaif photographed during the promotions of Bharat.

Actress Katrina Kaif who is gearing up for the release of her forthcoming film Bharat, hopes that she will start shooting of the film under her production house by this year. Katrina was interacting with the media to promote Bharat on Friday in Mumbai. There were reports that Katrina Kaif has bought the rights of the French film He Loves Me He Loves Me Not a while ago but the project couldn't take shape earlier due to undisclosed reasons. However, it has now taken off and is being developed.

Talking about the development, Katrina said, "That French film is a story on which we are working on for quite a sometime. It's not a French film actually but there were few ideas which had come to me. I really liked it and I might put my name to it as a producer. I would like to put my name for which I feel very strongly about. There are few discussions happening so, hopefully this year will start shooting for the film."

Katrina is one of the actors who joined social media very recently but in short span of time, she has millions of followers on multiple social media platforms, when asked Katrina how she feels about it, she said, "I am happy. I think it's been a nice decision for me. I don't know why I was stressed about it. I was really against coming on social media. I remember when Twitter first came to India, my manager told me that Twitter wants me to join this platform and that time, it was an endorsement kind of a thing and nowadays, everybody is posting on Twitter for free and I was not much interested in coming on this platform and now everybody is on Twitter so, I feel sometimes I lack foresight and the vision."

Katrina added, "For me, the deciding factor to join social media was there was a phase where everything I was reading about myself, I was like this is not a correct representation of me and I used to feel very helpless about it. Then, I started thinking about why it is happening with me more so than other people then, I realised that everyone has a platform on which they used to speak so that made me join social media."

Bharat is scheduled to be theatrically released in India on June 5, 2019, on the occasion of Eid al-Fitr.