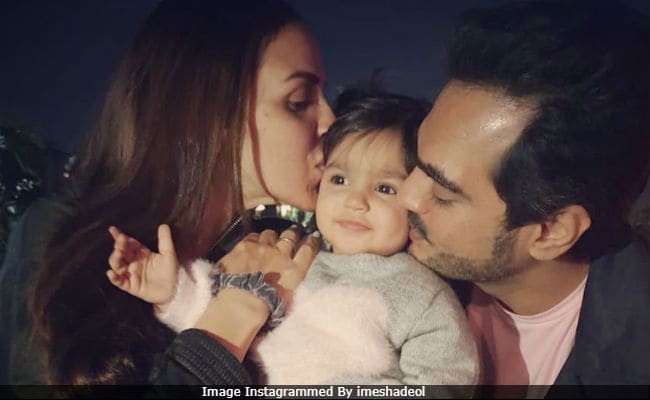 Actress Esha Deol and her husband Bharat Takhtani are expecting their second child together. Esha announced her pregnancy on social media with a cute post featuring their daughter Radhya, whom they welcomed in 2017. "I'm being promoted to big sister," read the text on the photo, in which Radhya looks adorable in a pink dress. Congratulatory messages are pouring in for the couple after Esha announced her pregnancy. Esha's No Entry co-star Celina Jaitley was among the first ones to congratulate her and Bharat Takhtani. "No words. So happy for you, Bharat and Radhya. Hugs," she wrote. Here's what Esha Deol posted.

Esha Deol and Bharat Takhtani married in 2012. Radhya was born on October 23, 2017. After her birth, Bharat Takhtani told news agency IANS that Radhya's name has been derived from Goddess Radha. "We are very happy to announce that our daughter will be named as Radhya Takhtani. The name has been jointly decided by Esha and me," he said.

Esha is the elder daughter of Dharmendra and Hema Malini. Her younger sister is Ahana, who is married to Vaibhav Vohra. Dharmendra, Hema Malini, Esha and Bharat recently attended Ahana and Vaibhav's housewarming party in Mumbai.

Esha Deol made a comeback in the industry with 2018's short film Cakewalk. 2015's Kill Them Young was her last feature film. Esha Deol made her Bollywood debut in 2002 with Koi Mere Dil Se Poochhe. Dhoom, Yuva, No Entry and Dus are some of the other films on Esha Deol's resume.