Esha Deol posted a picture from Devesh Takhtani's wedding, in which she posted with her sister-in-law Tanvi, married to Manik Takhtani 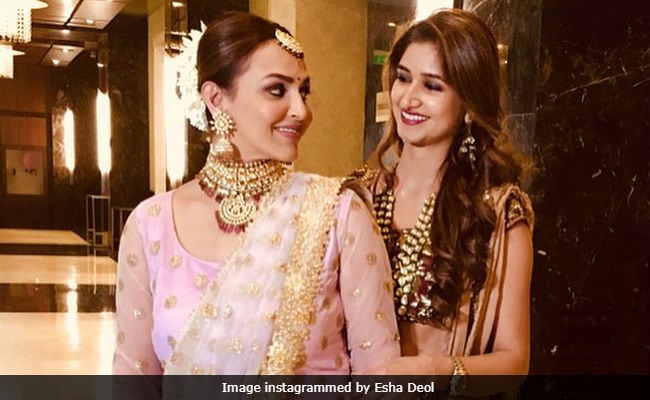 New Delhi: Actress Esha Deol wrapped the wedding celebrations in style, dressed in a soft pink Amy Billimoria ruffled sari. Esha attended her brother-in-law Devesh Takhtani wedding in Mumbai and shared just one picture from the Tuesday night event on Instagram. In the photo, Esha posed with her sister-in-law Tanvi Gupta, who is married to Manik Takhtani. Esha also shard a video of her dancing in the baaraat procession (her laughter is infectious) and glimpse from the wedding. Take a look at the pictures from the Takhtani family gala here:

All set for #devasthan wedding with my gorgeous sister in law @tanvi_gupta21 !

Earlier, Esha had instagrammed pictures from the mehendi ceremony and the sangeet function, where Esha's mother Hema Malini was also in attendance.

Esha Deol married businessman Bharat Takhtani in 2012 and the couple welcomed their first child, daughter Raadhya in October 2017. Esha Deol is the elder of Dharmendra and Hema Malini's two daughters. Her sister Ahaana is a professional Odissi dancer and has performed with Hema Malini at various events.

Esha, also an Odissi dancer, made her Bollywood debut in 2002 film Koi Mere Dil Se Poochhe. She went on to star in films like Na Tum Jaano Na Hum, Dhoom, Kaal and Darling. Esha has also featured on television reality show Roadies X2 and she is all set to make a comeback in a short film.

Promoted
Listen to the latest songs, only on JioSaavn.com
When Esha will shoot Cakewalk in Kolkata later in March, Bharat will look after their daughter Raadhya. She told news agency IANS: "I have requested my husband to take a break for a few days and just be with Radhya while I wrap up the shoot in one schedule. And I am lucky to have someone like Bharat."