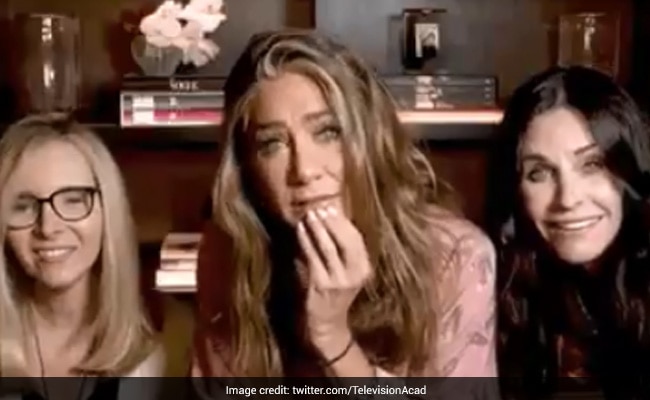 F.R.I.E.N.D.S stars in a still from the video. (courtesy: TelevisionAcad )

The 72nd edition of the Emmy Awardswas full of surprises. The biggest one being a mini reunion of F.R.I.E.N.D.S. Yes, that happened. The reunion featured the show's leading ladies Jennifer Aniston, Lisa Kudrow and Courteney Cox. The show's host Jimmy Kimmel checked up on Jennifer Aniston after her fiery stint (more on that later), who swapped her sleek black gown for a pretty pink outfit back at home. Jennifer, who was nominated in the lead actress drama category for The Morning Show, interacted with Jimmy through a video call and guess who accompanied the actress - her friends, of course. Courteney Cox, who was Jennifer Aniston's roomie and BFF in the popular sitcom F.R.I.E.N.D.S, said during the video call, "We live together." When Jimmy Kimmel asked the trio, "You do?" Jennifer Aniston replied, "We've been roommates since 1994, Jimmy."

The official Twitter page of the Television Academy, shared a GIF, featuring Jennifer Aniston, Courteney Cox and Lisa Kudrow and the text on it read, "Betcha didn't see a F.R.I.E.N.D.S reunion coming at the 2020 Emmys."

Jennifer Aniston, who accompanied the show's host Jimmy Kimmel to the stage earlier this morning, to present the award for outstanding lead actress in a comedy series, took extra precaution to sanitise the envelope with the winner's name. They added a lot of disinfectant to it and then threw it in a bucket lit on fire. Here's a snippet , you can thank us later:

Jennifer Aniston puts out a fire and saves the #Emmys! pic.twitter.com/hUBfzVzTn8

The 72nd edition of the Emmys was the first major award show since the outbreak of the coronavirus pandemic, this year. Talk show host Jimmy Kimmel hosted the prestigious award ceremony. Succession won the best drama series, while Schitt's Creek emerged as a winner in the comedy category. Zendaya made Emmys history as the youngest lead-actress drama winner. Jeremy Strong won the Emmy for Outstanding Lead Actor in a Drama Series.