Sushmita Sen shared a video on her Instagram timeline, in which she can be seen doing the dhunuchi dance 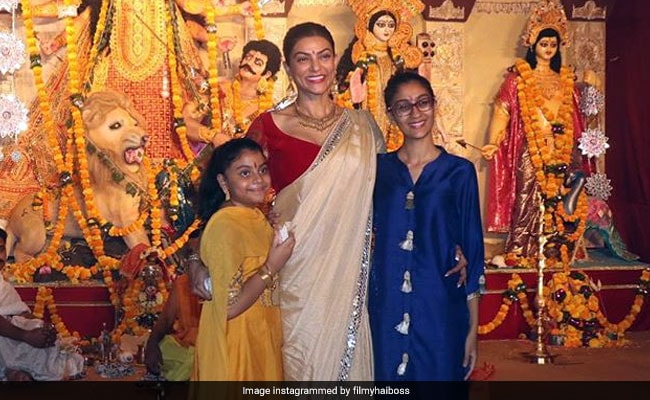 Actress Sushmita Sen shared a video on her Instagram timeline, in which she can be seen doing the dhunuchi dance with her daughters Renee and Alisah, as a part of the ongoing Durga Puja celebrations. In the video shared by Sushmita, the actress can be seen dancing with Renee, both holding an incandescent earthen pot stacked with coconut husk and camphor. In the later part of the video, Sushmita and Renee are joined by Alisah. Sushmita looked stunning in a beige saree, Renee and Alisah were also traditionally dressed for the occasion. "Dhunuchi naach. What a divine feeling dancing with my babies in celebration of shakti May the incense burn strong and spread positivity, love, hope and kindness where ever it flows!" the actress captioned her video. Dhunuchi naach is an integral part of Durga Puja celebration and the festivities can never be complete without a dab of it.

#dhunuchinaach What a #divine feeling dancing with my babies in celebration of #shakti May the #incense burn strong & spread #positivity #love #hope & #kindness where ever it flows!!!#notunpollidurgotsav #sharing #happiness #duggadugga I love you guys!!!

Sushmita Sen is celebrating Durga Puja with daughters Renee and Alisah and the trio were photographed outside a pandal in Bandra, Mumbai. Photos from Sushmita's outing with her daughters hit the Internet on Wednesday.

Sushmita Sen adopted Renae in 2000 and Alisah in 2010. Renee and Alisah make frequent appearances in Sushmita Sen's Instagram timeline. Sushmita Sen dotes on her daughters and is often seen documenting her love for them on social media.

In Bollywood, Sushmita Sen was last seen in 2010's No Problem and then in 2015 she featured in Bengali film Nirbaak. Of making a comeback in Bollywood, Sushmita in an interview to news agency IANS said: "(I am) finally reading lot of scripts and I really like two. I will tell you when I am closer to signing it."