Dubai Return: Irrfan Khan's Unreleased Film To Release On YouTube On This Date 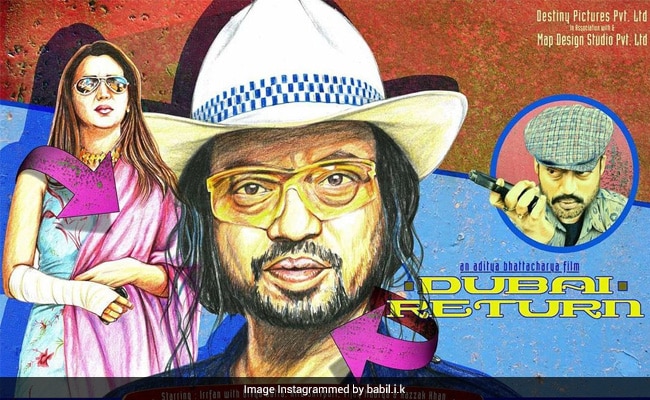 Fans of late actor Irrfan Khan have a reason to rejoice as Dubai Return, which is an old unreleased film of the actor is all set to release on YouTube on July 3. The update about Irrfan Khan's film was shared by his son Babil Khan, on social media. Babil shared a poster of the film on Instagram to inform his father's fans about the release of the film. "Releasing tomorrow on YouTube," Babil Khan wrote in the caption of the post. Babil's announcement just made our day. The poster of Dubai Return features Irrfan Khan wearing a hat and shades. Many fans of the late actor reacted to Babil Khan's announcement. "Cannot wait," a fan wrote in the comments section of Babil's post.

Check out the poster of Dubai Return here:

Dubai Return is a 2005 film. It features Irrfan Khan in the central role of a gangster named Aftab Angrez. The movie has been directed by Aditya Bhattacharya. Besides Irrfan Khan, it also features Vijay Maurya, Razak Khan and Divya Dutta.

Like his father, Babil Khan also aspires to be an actor. Earlier this week, he announced that he is dropping out of college to pursue acting. In a long Instagram post, he bid farewell to his college and college friends. Babil was studying in the University of Westminster.

Babil Khan is all set to make his debut in acting with Anvitaa Dutt's upcoming movie Qala. The film has been produced by actress-turned-producer Anushka Sharma's production house Clean Slate Filmz. Qala will release on Netflix.

Irrfan Khan died on April 29 last year. He was 53. Irrfan battled cancer for a year and received treatment in London. He returned to Mumbai in 2019. He is known for his work in some of the most critically acclaimed films like The Lunchbox, Hindi Medium, Life Of Pi, Piku, The Namesake, Madaari and many more.