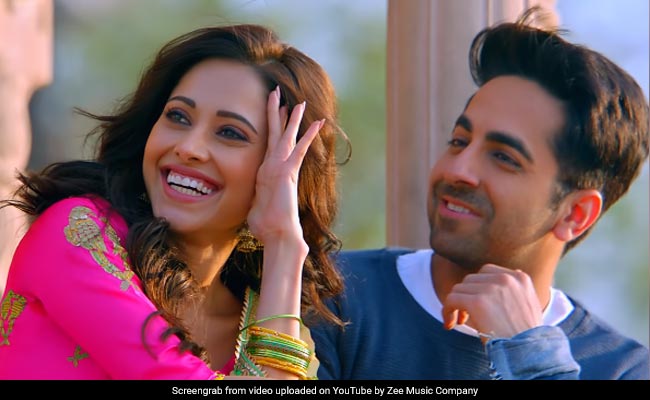 Ayushmann and Nushrat in a still from Dream Girl. (Image courtesy: YouTube)

After Radhe Radhe, Dil Ka Telephone and Dhagala Lagali, the makers of Dream Girl released another song Ik Mulaqaat from the film on Tuesday and it went viral in no time. The melodious love song has been pictured on Ayushmann Khurrana and Nushrat Bharucha and we bet it will make you fall in love with their cheerful characters all over again. The almost three-minute-long video perfectly summarizes small town romance as it features Ayushmann and Nushrat's desi-style attempts to impress each other on their date. It also shows Ayushmann Khurrana and Nushrat Bharucha's shyness and excitement as they traipse the narrow lanes of a vibrant bazar.

Ik Mulaqaat has been composed by Meet Bros and it has been sung by Meet Bros, Altamash Faridi and Palak Muchhal. The lyrics are by Shabbir Ahmed. The video, shared by Zee Music Company, has over 2 lakh views (and counting) on YouTube. Check out the song here:

Ayushmann Khurrana shared a glimpse from the song on his Instagram profile and wrote: "Ik Mulaqaat. A date to remember!" In Dream Girl, Ayushmann Khurrana plays Lokesh Bisht, who speaks to people as their phone-pal Puja for a living. Ayushmann's character also plays female mythological characters such as Radha, Sita and Draupadi for local stage shows. Nushrat Bharucha plays the role of Ayushmann's girlfriend in the film.

Ayushamann Khurrana has been garnering a whole lot of praise since the trailer of Dream Girl dropped on the Internet. Check it out:

Directed by Raaj Shaandilya and produced by Ekta Kapoor's ALTBalaji, the film is slated release on September 13.