"Celebrate Janmashtami like never before, with your Dream Girl," wrote Ayushmann Khurrana 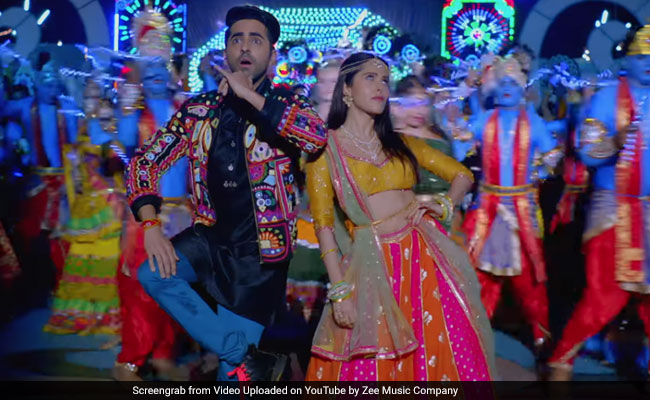 Ayushmann and Nushrat in a still from the song. (Image courtesy: YouTube)

The first song from Dream Girl hit the Internet on Wednesday evening and we absolutely love it. The song has been pictured on Ayushmann Khurrana and Nushrat Bharucha and it is fun-frollic and festive. The almost two-and-a-half minute video begins with a visual of film's lead actor Ayushmann dressed a Lord Krishna. The song perfectly encapsulates the essence of Janmashtami. We see the lead pair flirting throughout the course of the video. Nushrat's graceful dance moves and Ayushmann's quirky expressions are the highlight of the song.

Ayushmann Khurrana, who plays the titular role in the film, shared the song on his Twitter profile and he wrote: "Celebrate Janmashtami like never before, with your Dream Girl." Nushrat Bharucha, who plays Ayushamann's love interest in the film, shared the video and she wrote: "This Janmashtami, take the celebrations up a notch higher with our Dream Girl."

Celebrate Janmashtami like never before, with your #DreamGirl! #RadheRadhe song out now. https://t.co/I4VQf6MO3b@NushratBharucha@ektaravikapoor@ruchikaakapoor@writerraj#AnnuKapoor@nowitsabhi#VijayRaaz@oyemanjot#RajBhansali@EkThapaTiger@Akshat_R_saluja

Other than Ayushmann Khurrana and Nushrat Bharucha, Dream Girl also features Annu Kapoor, Vijay Raaz and Manjot Singh among other actors. The film showcases the story of Lokesh Bhat (played by Ayushmann),who speaks to customers as a phone-pal. He also female mythological characters for local stage shows.

Dream Girl has been produced by Ekta Kapoor's production house Balaji Telefilms and it has been written and directed by Raaj Shaandilyaa. The film is slated to release on September 13 this year and it will clash with Richa Chadha and Akshaye Khanna's Section 375.