"Things are getting scary around here," Katrina captioned the video 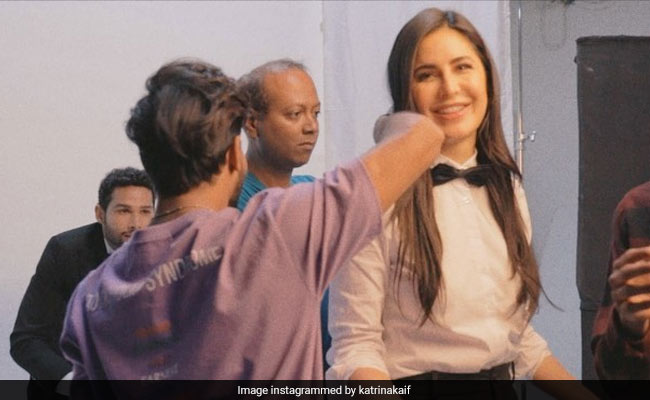 Katrina Kaif and Siddhant Chaturvedi in a still from the clip. (Image courtesy: katrinakaif )

Hours after announcing her new film with Siddhant Chaturvedi and Ishaan Khatter - titled Phone Bhoot - Katrina Kaif dropped a new BTS video from their first poster shoot on Monday and it will crack you up. Katrina, Siddhant and Ishaan play ghostbusters in the horror-comedy, which will release next year. Katrina's latest post, which she captioned like this, "Things are getting scary around here," starts with a "sensitive content" warning but as you continue to watch the clip, it shows Siddhant and Ishaan goofing around on the set of the poster shoot, which took place in March, and aiming at each other with soft ball bullet guns. When the epic gun fight between the duo gets intense, Siddhant hides behind Katrina to save himself from getting hit. To this, Ishaan says: "You don't get to hide behind Katrina Kaif."

When the duo run around her, trying to shoot each other, Katrina can be seen laughing and shouting: "I mean, c'mon!" The clip then shows one of the actors hilariously telling Katrina: "You are in the wrong movie," after which she calls them "grown-ups" for playing on the set. LOL.

Check out the ROFL video, reacting to which Ishaan Khatter commented: "Mature content":

Phone Bhoot will be directed by Gurmmeet Singh and produced by Farhan Akhtar and Ritesh Sidhwani under their banner Excel Entertainment. Earlier in the day, Katrina announced the big news on social media with a poster featuring herself, Siddhant and Ishaan and wrote: "The one-stop shop for all bhoot related problems, Phone Bhoot ringing in cinemas in 2021."

Phone Bhoot will be Katrina Kaif, Ishaan Khatter and Siddhant Chaturvedi's first film together. The film will reportedly go on floors by the end of this year.

Katrina Kaif will next be seen in Sooryavanshi while Ishaan Khatter and Siddhant Chaturvedi's upcoming films are A Suitable Boy and Bunty Aur Babli 2, respectively.