Does Sunny Leone Even Need To Rehearse Baby Doll Steps? She Does Anyway

On Instagram recently, Sunny Leone shared a rehearsal video of her practising groovy moves at a dance studio 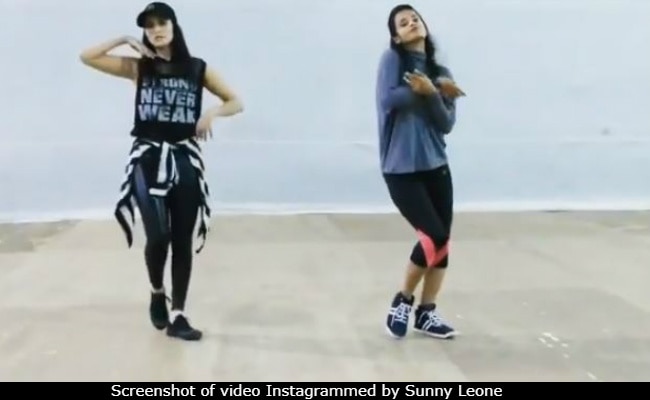 Sunny Leone in a still from her dance video (courtesy sunnyleone)

New Delhi: Sunny Leone loves to dance. Otherwise one would not just dare to accept Chris Gayle's dance challenge in a jiffy. On Instagram recently, the actress shared a rehearsal video of her practising groovy moves at a dance studio and part of the medley to which she sets the floor on fire comprises her own item number Baby Doll from Ragini MMS 2. "Rehearsing for the big day!! It's going to be amazing!!!" Instagrammed Sunny Leone, who looks like a rockstar and can be seen sporting black pants with crop tops. This is just a glimpse of her dance moves and the big day is yet to come but her Instagram followers have already reviewed it as "awesome."

Rehearsing for the big day!! It's going to be amazing!!!

Sunny Leone has quite a bit of reputation for her dance skills and of late, she's become Bollywood's favourite choice for special dance number appearances. Trippy Trippy from Sanjay Dutt's Bhoomi, Piya More from Baadshaho and Raftaar's new music video Loca Loca, Sunny has everything on her resume but her Laila Main Laila from Shah Rukh Khan's Raees had gone crazy viral when released. Sunny's song was a revamped version of 1980 film Qurbani. Sunny, who was overwhelmed with the response to the song, tweeted to thank her fans and said: "Keep the madness going!"


Promoted
Listen to the latest songs, only on JioSaavn.com
Not just Sunny Leone, another actress spotted posting rehearsal video would be Shamita Shetty - she's dancing to Twist Kamariya from Bareilly Ki Barfi, in the original of which Kriti Sanon made Ayushmann Khurrana dance like crazy.

Sunny Leone was last seen in Tera Intezaar, opposite Arbaaz Khan. Now, Sunny Leone is all set to make her Tamil film debut with Veeramadevi.