His caption read, “Moments that matter the most…Happy Deepavali from ours to yours” 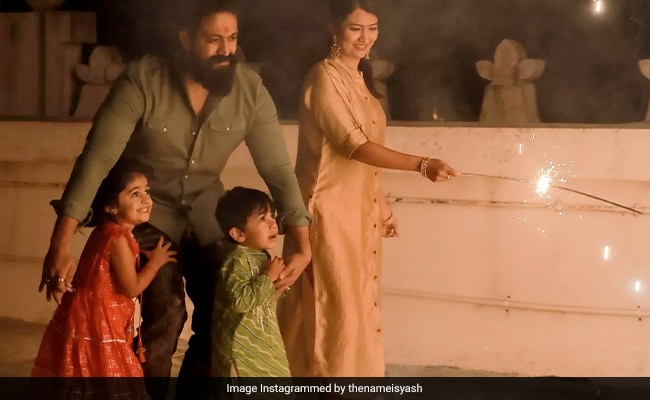 If there is one word to describe pictures from KGF star Yash's Diwali celebrations, it is – beautiful. The actor loved every moment of the festival with his wife, actress Radhika Pandit, daughter Ayra and little son Yatharv. Yash, on Tuesday, updated his Instagram timeline with a delightful Diwali album. It features him and Radhika bursting firecrackers with their little munchkins. Yash, dressed in an olive-green shirt and jeans, is seen holding Ayra and Yatharv in the first snap. The kids look fascinated by the sparkles emitting from a fuljhari. The next photo shows the actor and his wife helping their children hold fuljharis. Sharing the photos, Yash wrote about precious moments spent with family. His caption read, “Moments that matter the most…Happy Deepavali from ours to yours.”

Fans have also wished him in the comments section. “Sir, big fan of yours... Happy Diwali to you and your family,” wrote one. Another commented, “Happy Diwali, Rocky Bhai.” Rocky is the name of Yash's character in KGF films.

Yash and Radhika Pandit, who co-starred in movies such as Mr And Mrs Ramachari, Drama and Santhu Straight Forward, got married in 2016. Their daughter was born in December 2018 and they welcomed Yatharv a year after that.

The KGF star never misses an opportunity to express how much he loves his kids. Some time back, Yash treated us to a super cute video of Ayra, who is “an angel in disguise” for the actor. The father-daughter duo are seen playing adorably in the clip. “An angel in disguise. Yes… that's her! Ayra,” he wrote.

We just can't get enough of this clip from Ayra and Yatharv's playtime with Yash. Sharing the post, the actor wrote: “A “wild” start to our Wednesday.” Watch till the end to see Yatharv's cute run. It will leave you in splits.

On the work front, Yash was last seen in KGF: Chapter 2. The film also featured Raveena Tandon and Sanjay Dutt, among others.