"The team is working at rangoli today," wrote Tahira Kashyap 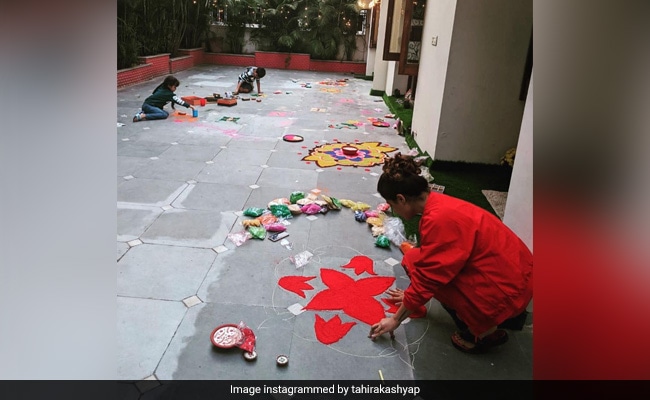 Tahira Kashyap gave us a sneak peek into her Diwali festivities, which began with Rangoli making, Tahira was assisted by her super cute "team," which comprised her and Ayushmann Khurrana's kids Virajveer and Varushka. Tahira, dressed in a red outfit, can be seen making a matching rangoli, while her kids made separate ones. She wrote in her caption: "The team is working at rangoli today." Tahira also asked her Instafam to share theirrangolis. She added, "Share yours too." Tahira Kashyap accompanied her post with the hashtags #diwali, #diwaliprep and #rangoli.

Tahira, who is currently in her hometown Chandigarh, shared pictures from her Karwa Chauth festivities earlier this month. Sharing pictures, she wrote: "Opening up my heart to the moon! Within the same city and yet a long distance one this year too. FaceTiming this day has become an every year ritual. Clicked by the 8 year old who told me how to pose for this one."

Tahira is married to actor Bollywood actor Ayushmann Khurrana. The couple are parents to a son named Virajveer and daughter named Varushka. The actor was last seen in Shoojit Sircar's Gulabo Sitabo with Amitabh Bachchan which released on OTT platform Amazon Prime Video.

Tahira Kashyap has written four books. Her latest book is called The 12 Commandments Of Being A Woman. Tahira wrote her first book I Promise in 2011, followed by her next novel Souled Out. She also co-authored husband Ayushmann Khurrana's biography Cracking The Code: My Journey In Bollywood. She has also has directed short films like Pinni and Toffee. The latter was screened at the 30th Cinekid International Film Festival, Amsterdam and at the 14th Bahamas International Film Festival.