Divyanka Tripathi Is In A State Of 'Perpetual Bliss' In Maldives. See Vacation Pics 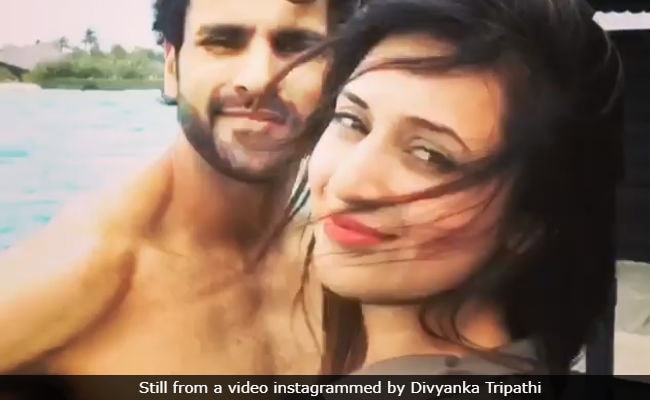 Actor couple Divyanka Tripathi and Vivek Dahiya took time off their busy work schedules for a anniversary vacation in Maldives and a day after their anniversary celebration, the Yeh Hai Mohabbatein actress shared a picture of herself in a state of "perpetual bliss." Going by their Maldives vacation diary we can totally see why. Divyanka Tripathi married Vivek Dahiya on July 8 two years ago and the couple celebrated their anniversary with 'a candle lit dinner by the sea waves' - Divyanka's "idea of most romantic date." Both Divyanka and Vivek shared several posts documenting the highlights of their trip.

A post shared by Divyanka Tripathi Dahiya (@divyankatripathidahiya) on Jul 8, 2018 at 11:41pm PDT

Sharing an amazing moment from her anniversary celebration, Divyanka posted this picture and wrote: "What you can't see in a picture... the feelings exchanged, hands held, moments of silence between non-stop talk, impromptu grooving on make-shift music."

My idea of most romantic date was always 'a candle lit dinner by the sea waves'. After experiencing it for the first time today I realised, what makes a grand idea actually work is your company and the moments shared together, rest all is just photo friendly. What you can't see in a picture... the feelings exchanged, hands held, moments of silence between non stop talk, impromptu grooving on make-shift music...That makes a 'real date'. Happy Anniversary Viv... Thanks for asking for my hand that day!

A post shared by Divyanka Tripathi Dahiya (@divyankatripathidahiya) on Jul 8, 2018 at 1:35pm PDT

Vivek Dahiya, who currently headlines the cast of Qayamat Ki Raat, shared his version of anniversary well-spent on Instagram. Result? Internet-breaking posts like these:

Anniversary special. Love to each one of you for such warm wishes and greetings! #Maldivek

I watch chick flicks with her, she watches football with me!

Divyanka and Vivek, both 33, met on the sets of Yeh Hai Mohabbatein, in which she played the lead role while he featured as a supporting character briefly. They fell in love while working together and got engaged in January 2016. Their wedding was held in Bhopal (Divyanka's hometown), which was followed by a grand reception in Chandigarh, which is Vivek's hometown.

Promoted
Listen to the latest songs, only on JioSaavn.com
Divyanka Tripathi debuted with Banoo Main Teri Dulhann and followed it up with shows like Ssshhhh...Phir Koi Hai and Mrs & Mr Sharma Allahabadwale. Vivek Dahiya's first show was Yeh Hai Aashiqui.