Disha Patani shared the video on Instagram, leaving fans in awe of her skills 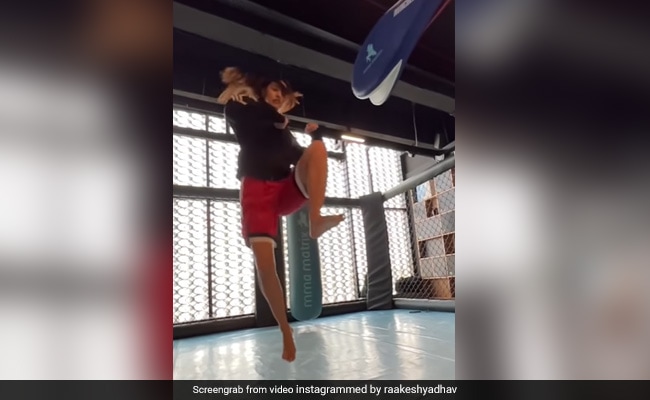 Disha Patani in a still from her video. (Image courtesy: dishapatani)

Disha Patani is one diva you do not want to mess with. Her stunning looks and graceful dancing skills aside, the actress is also loved by fans for her amazing fitness abilities. Disha Patani often shares videos of her workouts and makes sure to raise the bar with every post. On this lazy Monday, the actress made her Instafam sit up and take notice of her killer fitness levels by sharing a clip of her performing the 720 kick, a form of kick practised in Taekwondo. In the video, Disha Patani is seen jumping and spinning in the air, before performing the kick.

Sharing the video, Disha Patani wrote, “Finally getting there,” with a butterfly emoji and the hashtag “720 kick”.

On the occasion of Diwali too, Disha Patani wished her fans with a video of her performing multiple kicks. Sharing the clip, Disha said, “Happy Diwali. Be kind to animals,” with heart emojis.

Reacting to the post, Ayesha Shroff replied with multiple heart emojis. Ayesha Shroff is the mother of Tiger Shroff, who is rumoured to be dating Disha Patani.

When Disha Patani is not impressing us with her fitness posts, she has us mesmerised by her stunning looks. Recently, the actress shared a photo of herself chilling on the beach in a white bikini. It appears that the photo is from Disha Patani's Maldives vacation that she took with her rumoured boyfriend Tiger Shroff, a few months ago.

Previously, the actress also shared another picture from the island getaway in which she is seen relaxing in an outdoor restaurant by the waters. Sharing the video, Disha Patani wrote, “Missing.”

On the work front, Disha Patani was last seen in Radhe: Your Most Wanted Bhai. In the film, she was paired opposite Salman Khan. Salman Khan and Disha Patani earlier appeared together in Bharat. Her upcoming projects include Ek Villain 2, alongside Tara Sutaria, Arjun Kapoor and John Abraham.