Actress Disha Patani is no doubt a sensation on the Internet. If she doesn't have viewers smitten by her looks, she has them impressed with her smooth dance moves. And, to top it all, Disha is also known for her workout and exercise videos that have left viewers in awe for a long time. A welcome addition to the list of such videos came in the form of a clip that the actress shared on Instagram on Sunday. While the rest of us were lazing in our beds, Disha Patani was pulling off some sleek flying kicks at the gym and boy, are we impressed!

And, we are not alone in our admiration. Her rumoured boyfriend, actor Tiger Shroff could not help but comment on the post. It appears like words failed Tiger Shroff, who chose to use emojis to convey what he was feeling. He dropped clap, fire, and heart-eye emojis in the comments section. The comment garnered over 1,400 likes in just a few hours. Disha Patani also went the no-words route and used just a monkey emoji in the caption. 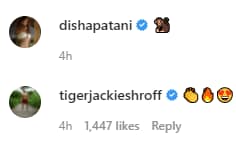 Previously, the actress had shared another video of herself performing some cool backflips. And while that is a difficult stunt to pull off, Disha Patani made it look easy and even smiled for the camera at the end of the video.

In another such video, Disha Patani performed not just backflips but also somersaults and was seen swinging on a gymnastic ring. This video too drew a response from Tiger Shroff. The actor wrote, “Woah! Wish I could do that.” Interior designer, Sussanne Khan also commented on the post. She wrote, "Both of you are incredible. Full power to shine on limitless."

Disha Patani's was last seen in Prabhu Deva's Radhe: Your Most Wanted Bhai with Salman Khan. She made her debut in the 2015 sports biopic MS Dhoni: The Untold Story, alongside late actor Sushant Singh Rajput.  In addition to the film Baaghi 2, Disha Patani and Tiger Shroff have also appeared in a music video together.