A still from Karan Kapadia's film shows that he has been detained for a crime, which is being investigated by Sunny Deol 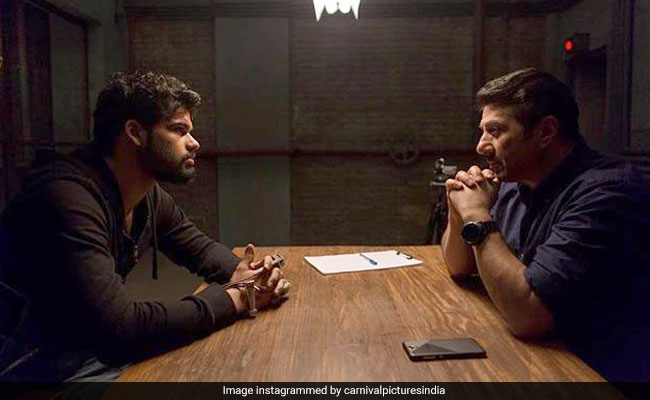 Dimple Kapadia's nephew Karan Kapadia's debut film, titled Blank, will hit the screens in May this year, the filmmakers revealed in an Instagram post on Tuesday. The filmmakers also shared a still from the work-in-progress film featuring Karan Kapadia and Sunny Deol. The two actors can be seen seated across a table in what looks like an interrogation room. Karan Kapadia is handcuffed and it seems the Sunny Deol is tasked with grilling the detainee. Blank, an action thriller, is directed by newcomer Behzad Khambata, who assisted Umesh Shukla on OMG! Oh My God and he was also the associate producer of 2017 film Behen Hogi Teri.

#DimpleKapadia's nephew #KaranKapadia's debut #Blank to release on 3rd May 2019! The action packed thriller, titled 'Blank' which also stars @iamsunnydeol in a pivotal role is all set to hit the silver screen on 3rd May, 2019. Carnival Motion Pictures and @easemytrip Trip present, an Echelon Production, produced by Dr. Shrikant Bhasi, Mr. Nishant Pitti, Mr. Vishal Rana, Mr. Tony D'souza and @andpicturesin. "Blank" starring Karan Kapadia and Sunny Deol in lead roles, directed by @behzu is all set to release on 3rd May, 2019 & is a @panorama_studios Studios Distribution nationwide release.

A post shared by Carnival Motion Pictures (@carnivalpicturesindia) on Mar 5, 2019 at 1:16am PST

Apparently, Karan's brother-in-law Akshay Kumar (married to Twinkle Khanna) has been roped in for a cameo role in Blank.

Karan is the son of Dimple Kapadia's sister Simple Kapadia, who was an actress and costume designer. Simple Kapdia has featured in films like Anurodh, Jeevan Dhara, Hum Rahe Na Hum and Dulha Bikta Hai. She won a National Award for Best Costume Design for Rudaali, which featured Dimple Kapadia in the lead role.