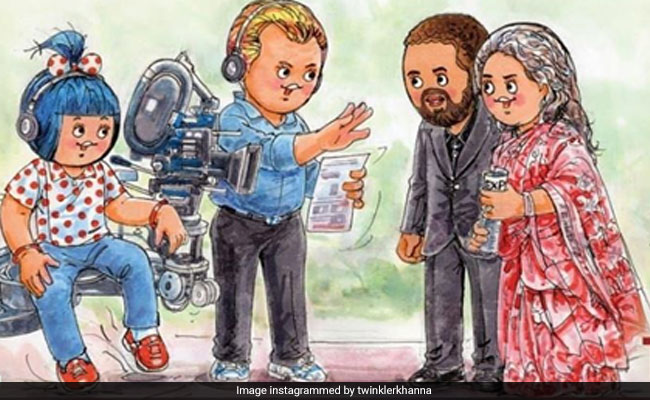 Dimple Kapadia might be a social media recluse but her daughter Twinkle Khanna is ensuring that her mother's presence is felt on Instagram. The reason we brought this up today is because the 45-year-old author shared an adorable graphic poster by Amul, which features caricatures of Dimple Kapadia and Christopher Nolan, who are working together on the film Tenet. The caption on the poster read: "For the Dimple pleasures" and the sub-text on the post read, "Ten on Tennet" (cryptically hinting at the film Tenet). Twinkle, who was obviously delighted to see the poster, captioned the post: "This is too cute. Mother is going places."

This is too cute. Mother is going places :) #AmulBaby

A proud Twinkle Khanna congratulated her mother Dimple Kapadia after she signed the film with Christopher Nolan by sharing a special post and wrote: "On a personal note - Congratulations Mother! So proud of you! You are truly amazing and you set an example for all of us that age is not an obstacle in the path of ability and talent. Hurrah!"

MOOD!! Congratulations, if anybody in the world deserved this it's you , you're a fine actor and an even better human being and after killing it for over 45 years , you never seize to amaze , I love you, now go do what you do best. #dimplekapadia#christophernolan#tenet

Tenet will mark Dimple Kapadia's debut in Hollywood. The 61-year-old actress is best-known for her performances in Bollywood films such as