"He told me he had seen my Satyajit Ray films and found me very good in the films. "I was tongue tied!" said Sharmila Tagore 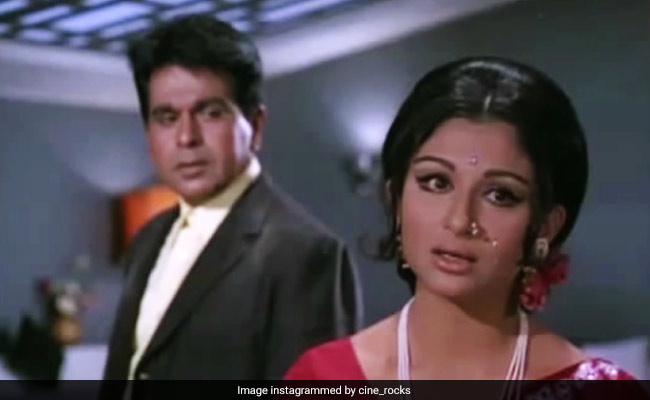 Veteran actor Sharmila Tagore says her fondest memories of Dilip Kumar are from the icon's off-screen personality: an actor who wasn't limited by his stardom to stand with those in need. Born as Yousuf Khan in Peshawar, now in Pakistani, the 98-year-old actor passed away on Wednesday due to prolonged illness. Tagore, who worked with Kumar in the 1972 BR Chopra thriller Dastaan said the actor was forthright in setting up charity events and leading from the front every time the industry needed to band together during a crisis. "At that time, the industry was so close knit, that every time there was any earthquake, drought, a calamity or any crisis, the industry got together and raised money. I remember Yousuf sahab taking a lead role in all these activities. He was like a leader. So many times we would meet at his house, all the big stars including Rajendra Kumar, Dharmendra, Shashi Kapoor, Sadhna... He would preside over the meetings. We would automatically listen to him. He had that command," Sharmila Tagore told news agency PTI.

The actress said the industry didn't respect Kumar simply out of an obligation owing to his stardom. There was a genuine admiration for his "volume of work." He could create magic on screen with the same ease he could organise an all-star cricket match for charity. Kumar, as Tagore said, was a man who "could do it all." Sharmila Tagore recalled how she still has pictures from one of the charity cricket matches organised by Kumar, in which her late husband Mansoor Ali Khan Pataudi did the umpiring. "I remember when we were doing Dastaan, there was an indoor badminton court behind BR Chopra's house. He would play there. Once I tried to play with him but he was so much better! He could play chess, badminton, was interested in cricket. He had a lot to talk about beyond acting."

The 76-year-old actor's first meeting with Kumar was in the early 60s, after she moved to Mumbai to film her Hindi debut, Kashmir Ki Kali. Kumar was the "first star" Sharmila Tagore adored. "He was such a legend. I was so keen to go and see him. Luckily, I met his sister Saeeda and became friends. One day she took me to meet him. We met at his house and he told me he had seen my Satyajit Ray films and found me very good in the films. I was tongue tied! In the car, I had rehearsed so much of what all I would tell him but at that time, I could not say anything. He spoke in English and Urdu and I just sat like a fan. He wished me luck, told me that Bollywood is a wonderful industry, acting a wonderful profession. 'I am so happy you're a part of it,' he had told me," the actor recalled.

A decade later, when Sharmila Tagore got the opportunity to work with him as a co-star in Dastaan, even the limited screen time in the film could not stop her to take up the project. "I had a small role in the film but I did it only because I would get a chance to work with him. When Chopra sahab asked me for the film, I told him 'I am not even looking at the script.' Yusuf sahab was extremely kind, generous. When I S Johar (actor) would talk to me about my pronunciation, Yusuf sahab would say, 'No, there's nothing wrong. She's speaking her lines quite well.' He was the best we had seen on-screen. An actor par excellence," she said.

Sharmila Tagore said Kumar had an earnest approach towards his craft, never treating acting as a money-minting profession: "He did one film at a time, when most of us were working on four-five films. Money was not that important to him as his roles. He was very particular about his characters and went into every detail. His performances still remain relevant. Nobody can imitate that. The subcontinent loved him. He was beyond any geographical border. He got Pakistan's highest award, was very well known in Bangladesh. He was loved across."

Dilip Kumar's passing away was also a reminder for Tagore of the time when he wrote her a handwritten letter after the death of Khan Pataudi. Tagore said she will cherish the letter, just like Kumar's memories. "I know he was ailing for a long time. It was time for him to go. I've been in touch with Saira, we were contemporaries. She often writes to me, she has been there for me. After Tiger passed away, Yousuf sahab wrote a lovely hand written letter which I will always cherish. He will be remembered forever and would hold an iconic position in the history of Indian cinema," she added