Demi Moore's Daughters Speak Out About Her Drug Abuse 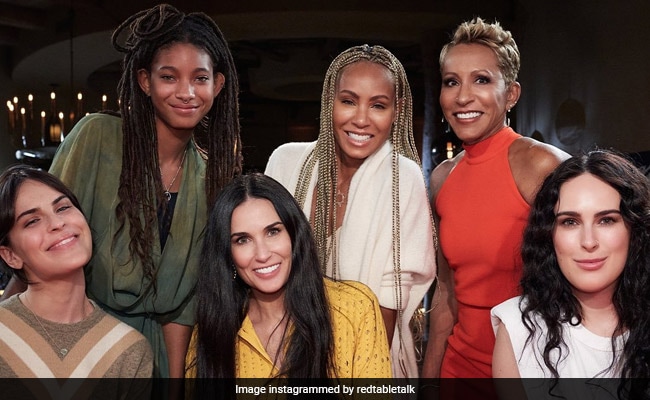 Among the traits setting Jada Pinkett Smith's Red Table Talk apart from other talk shows is its ability to address any given subject from a multigenerational perspective. Pinkett Smith leads the Facebook Watch show while seated alongside her mother, Adrienne Banfield-Norris, and teenage daughter Willow, making it an apt setting for the guests of Monday's episode to work out some mother-daughter issues of their own.

Demi Moore and her daughters Rumer and Tallulah Willis, two of her three children with Bruce Willis, joined Pinkett Smith and her family for an intimate discussion of Moore's drug addiction and the strain it put on her relationships. It's a topic that Moore delves into at length in her best-selling memoir, Inside Out, and that she has spoken to journalists about, but not one that she has previously scrutinized with her daughters on such a public platform.

The conversation, edited into a half-hour episode, expands to touch upon Rumer and Tallulah's own struggles with substance abuse and, as Pinkett Smith puts it, is designed to "try to break some of the cycles."

Here are some of the most significant takeaways.

As children, Rumer and Tallulah rarely witnessed their mother's vulnerability

Early on in the episode, Tallulah mentions feeling as though Moore had always "made a choice to hold back certain things" from her kids and refrained from "sharing about her past" in a way that added distance between the two generations. Tallulah never knew much about Moore's addiction, nor about the fact that, as Moore reveals in Inside Out, the actress was raped at 15 by a man who had allegedly paid Moore's mother $500.

"I don't think my mom was raised; she was forged," Tallulah says, echoing her comment in a recent New York Times profile of Moore. "And the strength that comes from that, it's intimidating and scary."

After Moore comments that the high standard to which she was held meant her "room for error was very low," Rumer responds that it was "a byproduct of you not necessarily being weak in front of us." The conversation veers back to this subject late in the episode, when Moore refers to the toughness she projected, and for which she confesses she is still grateful, as a "survival mechanism."

"I realize I did them a disservice by not letting them see me as weak," Moore says to Pinkett Smith. "I think we need to show them not just our strength but how we process to get through disappointment, upset, hurt."

Pinkett Smith, who has struggled with her own addictions, admits that it took her a while to get "to a place of vulnerability, where I could cry in front of Willow. It took me so long because of that forging. There's this wall, there's this armor. I was thinking about how it does a disservice to everyone we love, including ourselves."

Moore relapsed during her marriage to Ashton Kutcher

As read aloud in the episode by Pinkett Smith, Inside Out begins with Moore's recollection of a moment when, estranged from all of her loved ones after relapsing, she realized she was completely alone.

Tallulah remembers feeling confused when Moore, who had been sober for roughly 20 years at that point, relapsed in the early 2000s: "I had no idea what was going on," Tallulah says. "She'd been sober my entire childhood, and then she drank. . . . All of the adults around us, in an effort to 'protect' us, were protecting her. If she wasn't sober, they would tell us she was. There was a complete lack of trust."

Moore continued to struggle throughout her marriage to Kutcher, compounded by the fact that, early in their marriage, she suffered a miscarriage while six months pregnant.

"It was like the sun went down and a monster came, you know?" Tallulah says. "I recall being very upset and kind of treating her like a child and speaking to her like a child. Being like, please get away from me. She got very angry, and it would happen in front of friends. It was not the mom that we had grown up with."

Moore's children didn't speak to her for three years

Both daughters touch upon how their relationships with Moore worsened during her relapse. Rumer, who had once called 911 to save her mother's life, also attributes some of the anger she felt toward Moore's repeated attempts to have another child.

"It was like, 'Oh, we're not enough?' " she remembers. "Part of the reason I moved out of the house was because after you had a miscarriage, I was like, 'Why are you so desperate to have another kid?' I couldn't stand the idea, but then I saw these pictures. I saw how big her stomach was and was like, 'Oh, my God. I'm so insensitive.'"

Banfield-Norris, who is 28 years sober, later says to Moore: "As a recovering addict, I understand that it's not a guarantee that people that you've hurt in your life, people who have been damaged by your behavior and your decisions, are going to remain in your life, you know? I've always been so grateful that Jada never gave up on me. She never gave up on us, and she was always there."

Rumer says she began to abuse alcohol when she stopped speaking to her mother and, at one point, "started getting anxiety attacks about how bad I was going to feel the next day."

Tallulah, who felt neglected by both parents - "My dad didn't understand that once a child graduates from high school, you still have to take care of them," she notes - abused drugs to the point where her other sister, Scout, once found her passed out from a mixture of cocaine and codeine.

"I had no regard for my life," Tallulah says. "I had no care. So my Dad got involved, and he threatened to send me to AA meetings as a punishment, which didn't really make any sense."

After Rumer and Scout staged an intervention, Tallulah returned to living with Moore and went to treatment - "by choice," Moore adds in the episode.

Moore distanced herself from her mother to protect her children

Moore's mother, who battled alcohol addiction, tried to kill herself several times throughout Moore's childhood. After one suicide attempt, as Pinkett Smith narrates in the episode, a young Moore dug pills out of her mother's mouth. The two shared a tumultuous relationship that worsened when Moore's mother sold stories about her daughter and grandchildren to the tabloids. They didn't speak for nearly a decade.

"There was a part of my compassion and my humanity that had been lost, and how could I expect my daughters to have compassion and hold the humanity for me if I didn't recognize that from my mother?"

"I really try to encourage people, no matter what they've gone through, to find that loving for their parent, or their partner, whatever it might be," Moore concludes.

(Except for the headline, this story has not been edited by NDTV staff and is published from a syndicated feed.)
Comments
demi mooredemi moore drug abuse