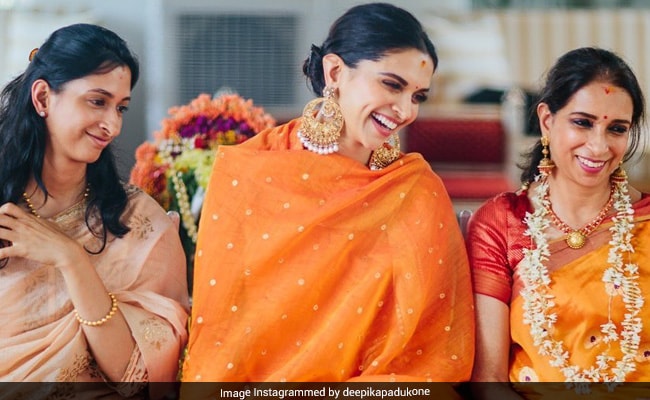 For Deepika Padukone, every other day is Mother's Day and her latest Instagram post clearly reflects that. While the world might just celebrate the first Sunday of May as Mother's Day, but for Deepika, only a single day to express her love for mother Ujjala Padukone is not enough. On Monday morning, the 34-year-old actress posted a stunning throwback picture along with her mother Ujjala Padukone and sister Anisha, who is a golfer. The picture happens to be from Deepika's pre-wedding festivities held at the actress' Bengaluru home in 2018. Dressed in a bright orange outfit by her wedding's official couturier Sabyasachi, Deepika's smile says it all. "Love you Amma," Deepika captioned the post.

On Sunday, the actress posted a memory from her school days, when she emerged as an overall winner in a "championship for primary seniors." Deepika, in her post, thanked her mother Ujjala Padukone for teaching her to be "ridiculously meticulous." She wrote: "For your unconditional love, for always putting our priorities before your own, for holding us together...every step of the way and last but not the least, for showing us how to be ridiculously meticulous!(as shown in exhibit B).We love you. Happy Mother's Day."

Deepika has signed the Hindi remake of the 2015 film The Intern, which was meant to star late actor Rishi Kapoor. The revised cast of the film has not been announced as of now. The original film featured Robert De Niro and Anne Hathaway in the lead roles. She will also be seen along with husband Ranveer Singh in Kabir Khan's sports drama '83, in which Ranveer will play the role of Kapil Dev and Deepika will play Kapil Dev's wife Romi Bhatia.