Deepika Padukone, who once dated Rishi and Neetu Kapoor's son Ranbir, visited the Kapoors in New York where the actor was receiving cancer treatment. 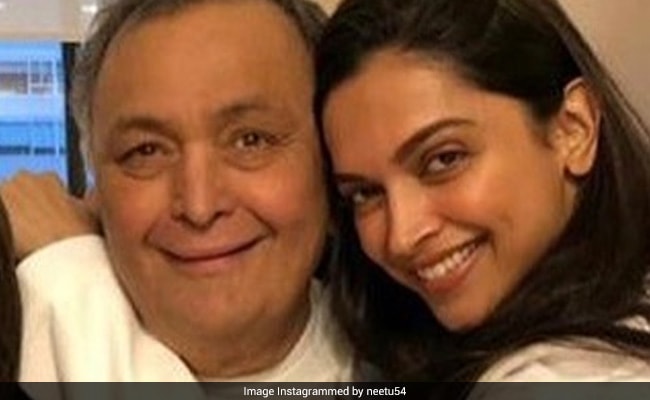 In two days, Deepika Padukone lost two future co-stars. Rishi Kapoor, who died of cancer on Thursday at the age of 67, had signed up to star with her in an adaptation of the Anne Hathaway-Robert De Niro hit The Intern. A day ago, Irrfan Khan died, also of cancer. He was just 53. Mr Khan co-starred with Deepika in 2015 film Piku and had been cast with her again in a Vishal Bhardwaj film on Mumbai's female gangsters. The film was postponed after Irrfan Khan's cancer diagnosis. For both actors, Deepika Padukone, who likes to keep is simple, shared a black screen on her Instagram account.

Deepika Padukone, who once dated Rishi and Neetu Kapoor's son Ranbir, visited the Kapoors in New York where the actor was receiving cancer treatment. Neetu Kapoor shared glimpses from their fun-filled session and wrote: "Such a fun evening with adorable Deepika Padukone. Gave lot of love and warmth."

Rishi Kapoor was taken to hospital on Wednesday and died the next day. He was cremated with family members and just a few friends attending the last rites. The Kapoors appealed for friends, well-wishers and fans to respect lockdown rules after the actor's death.

Earlier this year, Deepika Padukone announced her next project - the Hindi remake of Hollywood hit The Intern - in which Rishi Kapoor was to feature in the role originally played by Robert De Niro; Deepika was roped in for the role played by Anne Hathaway. After Rishi Kapoor's death, an update on the film's status is yet to be announced. The Body and Jhootha Kahin Ka remain Rishi Kapoor's last films, both 2019 releases.