"Have you tried this work out of Katrina Kaif?" asked Yasmin Karachiwala. 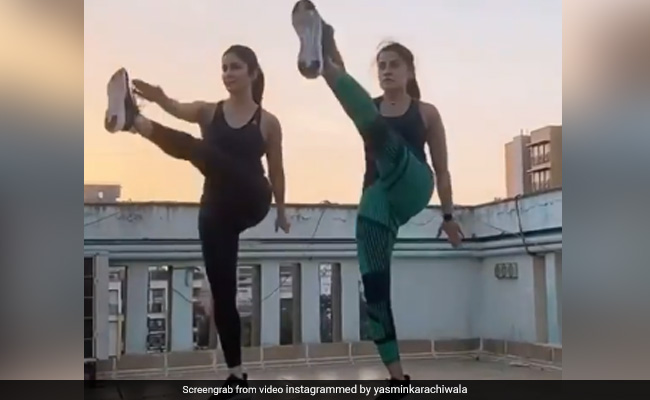 Katrina Kaif in a still from the video (courtesy yasminkarachiwala )

Can you bend it like Katrina Kaif? The 37-year-old actress recently featured in a work-out video shared by her trainer Yasmin Karachiwala, titled "work out with Katrina." The video is a compilation of Katrina's full body work out regime and is definitely not for the faint hearted. Set to Cardi B's peppy track Up, Katrina and Yasmin can be seen doing synchronized work outs in the video, which includes routines such as squat, push-ups, reverse lunge, plank and sit ups. "Have you tried this work out of Katrina Kaif?" asked Yasmin Karachiwala. Here's how Katrina Kaif is setting major fitness goals. Dare to try?

Katrina Kaif's fitness regime also includes Pilates, courtesy her trainer. Here's what Katrina wrote in a recent Instagram post: "I usually prefer gym, but I've realized you can get a lot of muscle work through Pilates as well - Yasmin has been taking me through focusing on one body part in our Pilates sessions."

Do goofy dance sessions count as work out? Here's Katrina's take on it:

In terms of work, Katrina Kaif was last seen in 2019 movie Bharat, in which she co-starred with Salman Khan. She will next be seen in Akshay Kumar's Sooryavanshi, the release of which has been postponed as theatres were shut because of the pandemic. Katrina Kaif's upcoming projects also includes horror comedy Phone Bhoot, in which she co-stars with actors Ishaan Khatter and Siddhant Chaturvedi.