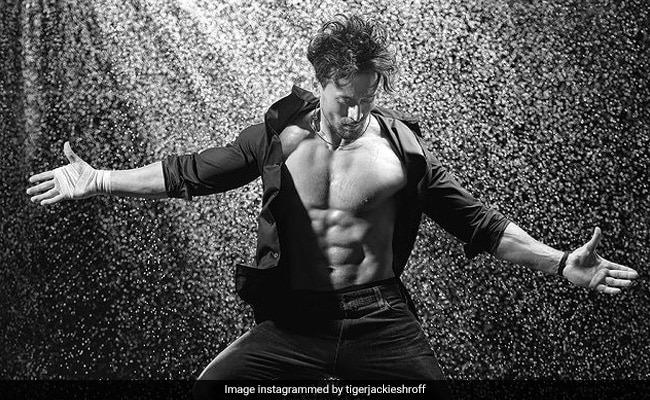 After Alia Bhatt, Kiara Advani, Sunny Leone and Vijay Deverakonda's pictures were shared from ace photographer Dabboo Ratnani's 2021 calendar over the last few days, a new shot of actor Tiger Shroff was revealed on Tuesday and it is interesting. The greyscale shot features the actor jumping in the air. Tiger can be seen wearing a shirt and trousers in the picture as he poses in the rain. We also got a glimpse of his abs in the picture. Sharing the picture on Instagram, Tiger Shroff wrote: "Making it rain before the monsoons! Thanks for another fun fast shoot." Sharing the same picture, Dabboo Ratnani wrote: "Life isn't about waiting for the storm to pass... It's learning to dance in the rain. Extraordinaire Tiger."

Ahead of the big reveal, Dabboo Ratnani shared a BTS picture with Tiger and wrote: "Launching soon! Watch this space for Tiger's calendar shot! BTS with Dabboo and the phenomenal Tiger." Tiger Shroff made an appearance in Dabboo Ratnani's annual calendar last year as well, which featured Bollywood's A-listers from the Bachchans to Shah Rukh Khan, Vidya Balan, Alia Bhatt, Anushka Sharma, Akshay Kumar, Kiara Advani and Vicky Kaushal among other stars.

Tiger Shroff was last seen in Baaghi 3, co-starring Shraddha Kapoor. The actor is best-known for starring in films like War, Heropanti, The Flying Jatt, the Baaghi series and Student Of The Year 2. The actor has an impressive line-up of films this year. His upcoming projects are Heropanti 2, Baaghi 4 and Ganapath.The actor made his debut as a singer last year.