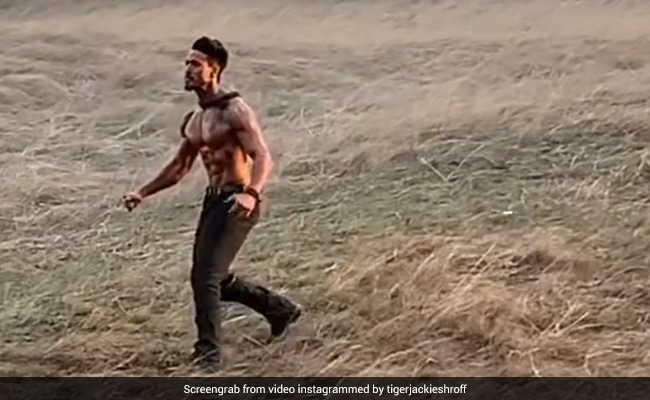 Tiger Shroff in a still from his video (courtesy tigerjackieshroff)

Head straight to Tiger Shroff's Instagram timeline for some heavy-duty inspiration. All of you who thought that Tiger Shroff has the resilience of iron, here's a thought. He is much more. Today, he dropped some behind-the-scenes clips and we are appalled, to say the least. In the first one, the actor can be seen trying to beat the strong wind to stay put as a chopper descends towards him. The second video shows his attempt to rip his shirt in the ice-cold and bitter climate. While sharing the post, the actor wrote, “A couple of hero shot ‘fails'. In 1, I couldn't stand firmly in one place with a heroic pose as I looked at the choppers because of the intense storm fans...And two, couldn't even rip my shirt off because it was so cold (-7) either that or I'm just a weakling making excuses.”

One of the fittest celebrities in the country, Tiger Shroff always has his hustle mode on. The actor gave a peek into some high-octane action in a clip he shared on the photo-sharing platform. We found our jaws dropped after witnessing the high-speed multiple flying kicks. As for the caption, he used a high voltage emoji.

Talking about Tiger Shroff's film lineup, he will soon be seen in Vikas Bahl's upcoming dystopian action-thriller Ganapath. Up next, he has Heropanti 2, co-starring Tara Sutaria. The actor will also be seen in Baaghi 4.