Count The Kapoors In This Grand Fam-Jam Pic: Anil-Sunita, Khushi, Shanaya And Others

Keeping up with the Kapoors 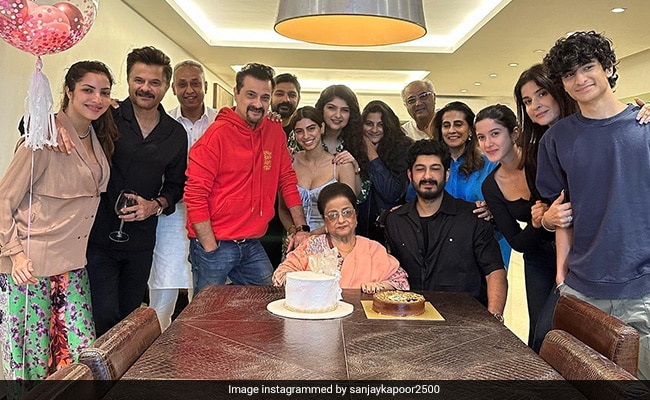 Members of the Kapoor family united for a get-together on Tuesday night. The occasion? It was Nirmal Kapoor's 88th birthday. Nirmal Kapoor's son and actor Sanjay Kapoor shared pictures from the fam-jam on his Instagram profile. The pictures feature Nirmal Kapoor with son Anil and his wife Sunita Kapoor, Sanjay Kapoor along with his wife Maheep Kapoor. The picture also features Nirmal Kapoor's son Boney and her grandchildren Shanaya, Khushi, Anshula, Jahaan, Rhea and her husband Karan Boolani. Mohit Marwah was also present at the bash. Sonam, Janhvi, Arjun and Harsh Varrdhan Kapoor were missing during the get-together. Akshay Marwah, also missing from the bash, commented on the post: "Massive FOMO."

Rhea Kapoor, sharing a video from the get-together, wrote: "For being in front of the camera so much it's impossible to get this family to take a picture properly. Happy 88 dadi! Missing Sonam Kapoor, Arjun Kapoor, Anand Ahuja and Janhvi Kapoor."

On Tuesday, Anil Kapoor shared this post for his mom and wrote: "The wonderful daughter, wife, mother, grandmother and now great grandmother celebrates her 88th birthday today! There's no one like you! Happy Birthday Mom."

Sonam Kapoor shared a picture of her son Vayu with Nirmal Kapoor. She also posted a throwback from her childhood days. Sonam wrote in her caption: "Happy happy birthday dadi love you."

Nirmal Kapoor was married to film producer Surinder Kapoor, who mostly produced films starring his son Anil Kapoor, such as Pukar, No Entry, Judaai and Loafer, to name a few. Her eldest son Boney Kapoor is a film producer, while Anil and Sanjay Kapoor are both film actors.

Tripti Dimri's Note To Qala Co-Star Babil Khan: "Your Voice Has The Power To Heal"