‘83 traces the journey of the Indian cricket team's victory at the World Cup in 1983. 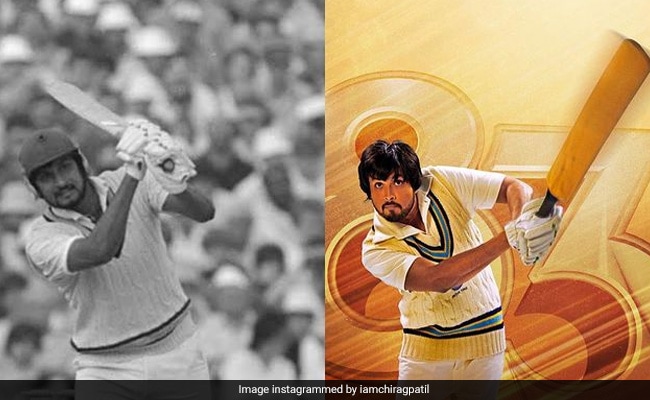 A collage of Sandeep and Chirag Patil. (courtesy iamchiragpatil)

Cricket and movies are two of the biggest crowd-pullers in India. So, when Kabir Khan put together an ensemble cast led by actor Ranveer Singh to recreate one of the most iconic moments in Indian cricket history in ‘83, you can bet the result is delicious. While the movie is special for many reasons, it is even more momentous for actor Chirag Patil. This is because he will be portraying his father Sandeep Patil, the veteran cricketer, and bringing to life his contributions to the World Cup-winning side, in the film. It comes as no surprise that the actor considers it an honour to play his father on screen.

In several posts and videos, since his first look as Sandeep Patil was revealed in 2019, Chirag Patil has spoken about what it means to be a part of 83.

Sharing a picture of himself wielding the bat like his father, Chirag Patil said,“As a boy, I idolised him; Now, I aspire to be a man like him. How fortunate must I be to portray my superhero on screen? The man who took India to the finals. Presenting Mumbai ka Sandstorm, Sandeep Patil.”

In another post, Chirag Patil shared a collage of Sandeep Patil from a match and a still from‘83. He wrote in the caption, “Honoured.”

And soon enough, Chirag Patil also received a stamp of approval from Sandeep Patil. In a video, the ace cricketer said, “From movie ‘83, my character look is out and I must say nakli is looking asli. Well done, Chirag.”

Sandeep Patil played an instrumental role in leading India to victory during the 1983 World Cup. After retiring from the game, Sandeep Patil first coached the India A team, then the Indian cricket team. He was also seen in the film Kabhi Ajnabi The. Chirag Patil, meanwhile, is known for his roles in Marathi films.  Vazandar and Asehi Ekada Vhave are two of his most popular films.

Chirag Patil isn't the only one who is portraying his father onscreen. Mali Marshall, son of legendary West Indies fast bowler Malcolm Marshall, is also part of the ensemble cast.

Actors Pankaj Tripathi and Boman Irani will also be seen in pivotal roles.

When You Are Disha Patani, Makeup Is Optional. Her Glowing Skin Is The Star Of This Selfie