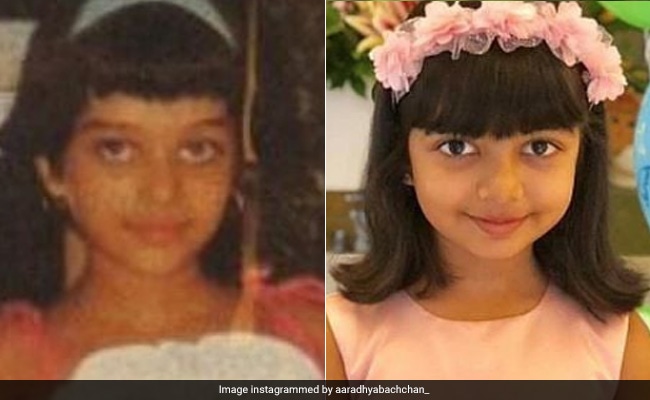 Fans of actress Aishwarya Rai Bachchan celebrated Children's Day by digging out a childhood photo of the former beauty queen to prove a point - Aaradhya looks just like Aishwarya Rai Bachchan from when she was a little girl. Fan-clubs have made a collage of one of Aaradhya's photo from her birthday party and of a much, much younger Aishwarya. In the photos, both Aishwarya and Aaradhya look adorable in pink dresses and matching headbands. Even their hairstyle is sort of same. Years later, the young Aishwarya in the photo grew up to become Miss World and then a successful actress. Aishwarya and Abhishek Bachchan got married in 2007 and Aaradhya was born to the couple in 2011.

The youngest Bachchan - Aaradhya - will celebrate her seveth birthday on November 16. On Instagram, she rules Aishwarya Rai Bachchan's feed. Aaradhya recently made a trip to Rome with Aishwarya and Abhishek on Aishwarya's birthday.

A post shared by AishwaryaRaiBachchan (@aishwaryaraibachchan_arb) on Nov 1, 2019 at 8:19am PDT

Aaradhya has also been accompanying Aishwarya Rai Bachchan to Cannes since she was a baby.

On the work front, Aishwarya and Abhishek will be seen together in Anurag Kashyap's upcoming film Gulab Jamun. Aishwarya will also be voicing Angelina Jolie's character in Maleficent: Mistress Of Evil, which also has an Aaradhya connection. "Aaradhya and we loved Maleficent as a character. The idea of doing a voice-over than an actual performance delivered by another actor was interesting and unique. It all happened very quickly and suddenly. I surrendered to what I felt was some kind of divine push," PTI reported Aishwarya as saying.