"More power to you, sir": Vicky Kaushal to Rishi Kapoor 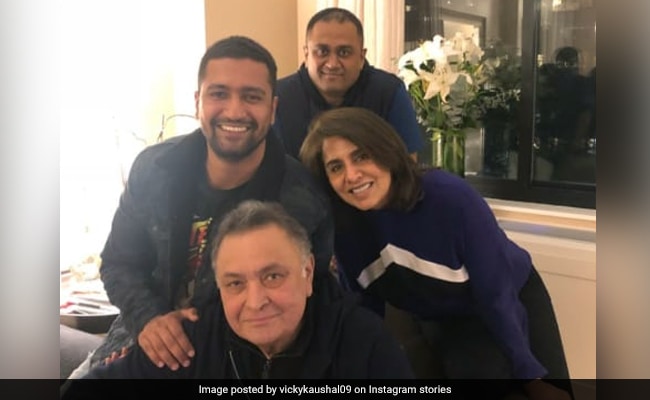 Vicky Kaushal shared this on his Instagram story (courtesy: vickykaushal09)

Vicky Kaushal, who is in New York ahead of this birthday, wouldn't have missed meeting Rishi Kapoor in the Big Apple and he didn't. On his Instagram story, the Sanju actor shared a glimpse of his meeting with Rishi and Neetu Kapoor along with a health update on the veteran actor and a thank you note. Referencing the viral dialogue - "How's the josh?" - from his film Uri: The Surgical Strike "Nothing can beat his josh! More power to you, sir. Thank you, for the wonderful time Rishi sir and Neetu ma'am," wrote Vicky Kaushal and attached the heart and the Namaste emojis. In the photo, Rishi Kapoor smiles at the cameras with Vicky and Neetu Kapoor on either side of him. Earlier this month, Deepika Padukone dropped by to visit Rishi Kapoor, when Neetu Kapoor dedicated an Instagram post to the "adorable" Deepika. Neetu and Deepika trended a great deal for their Instagram exchange: "Such a fun evening with adorable Deepika, gave lot of love and warmth," she wrote while Deepika replied: "Thank you both for such a fun, memorable evening! To good health, happiness, peace of mind and many, many more laughs."

Rishi Kapoor, who has been undergoing treatment for cancer in the Big Apple for the past eight months, has been declared cancer free. Speaking to news agency IANS recently, Rishi Kapoor's son Ranbir said: "He is doing much better. Hopefully, he should be back in a month or two and his spirits are up and there is a lot of positivity in his behaviour."

During his stay in New York, Rishi Kapoor has had visitors such as Priyanka Chopra, Aamir Khan, Sonali Bendre, Alia Bhatt and others.