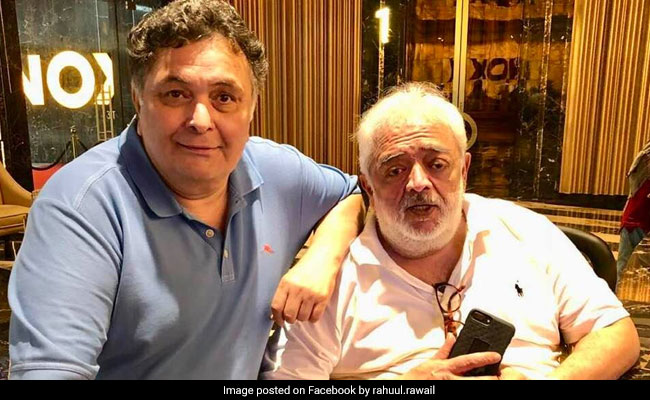 Filmmaker Rahul Rawail (director of Betaab, Anjamand Aur Pyaar Ho Gaya) on Tuesday posted a picture of himself with actor Rishi Kapoor on his (unverified) Facebook page and wrote: "Rishi Kapoor (Chintu) is cancer free." The picture was taken during a special screening of Sanju, which featured Rishi Kapoor's son Ranbir in the lead role. After Rahul Rawail's post went viral on social media, news agency IANS reported that Rishi Kapoor's actor brother Randhir Kapoorr was "swamped with calls" to verify the information shared by Rahul Rawail. Randhir Kapoor told IANS: "Rishi is doing much better. He has to finish his course of treatment, and will be back in India in the next few months." Rishi Kapoor left for the treatment of an undisclosed ailment in September 2018 and so far, all his family members have refrained from sharing the details of his illness or medical procedure.

This is the second time it has been suggested that Rishi Kapoor was battling cancer all these months. In her New Year's post, Neetu Kapoor posted a picture of the family celebrating together and wrote, "Hope in future cancer is only a zodiac sign," which first set the reports of the actor battling cancer in motion.

After Neetu Kapoor's post went insanely viral, Randhir Kapoor told Hindustan Times: "I don't know much about it but this much I can tell you that (Rishi Kapoor) is doing well, that's all. Let people say whatever they want to."

In March, a source close to the Kapoors told news agency IANS that Rishi Kapoor was feeling 'homesick' and he's eager to return home. "Rishi is homesick and very eager to return home. They have a wedding to plan. And he's counting the days," the source was quoted as saying. It has been reported that Rishi Kapoor wants to return in time for Ranbir Kapoor's rumoured impending wedding to actress Alia Bhatt, who stood by the Kapoors in their difficult time.

Recently, Ranbir Kapoor also reiterated that his father will be home soon in an interview with news agency PTI.