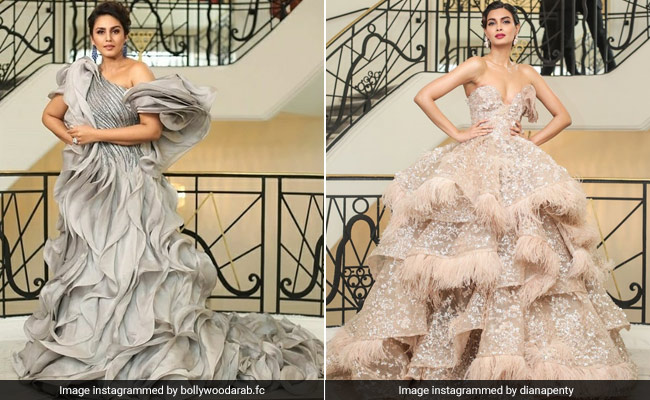 The 72nd edition of the Cannes Film Festival is buzzing with desi stars representing India at the French Riviera. Among them are Huma Qureshi and debutante Diana Penty, who are making heads turn in red-carpet worthy ensembles from both desi and international couture. On Sunday evening in the French Riviera, Huma Qureshi stepped out in a metallic hued grey Gaurav Gupta ensemble accentuated with ruffles running down into a gathered train. Drama has always been the flavour of Cannes red carpet and Huma added just that with her exaggerated sleeves and sparkly lines adorning her torso. Posing on the stairs of Hotel Martinez, Huma Qureshi gave us a detailed glimpse of her Chopard earrings.

Diana Penty believes "Go big or go home" and guess which one she went with? Dolled up in a Nedo By Nedret Taciroglu ball gown, Diana Penty styled her hair in retro waves and a neat bun. Diana Penty's pale-peach-bordering-on-beige dress was styled with alternate layers of fringes and sequins. She too sparkled her way through our hearts. Diana Penty's rose-tinted make-up was completed with pink lips - such a refreshing break from the trending nude make-up looks at Cannes.

Earlier in the day, here's how Diana Penty and Huma Qureshi warmed up for their stellar appearances.

Diana Penty and Huma Qureshi are fellow ambassadors for liquor brand Grey Goose and were spotted hanging out with Priyanka Chopra and Nick Jonas at Saturday's Chopard party.