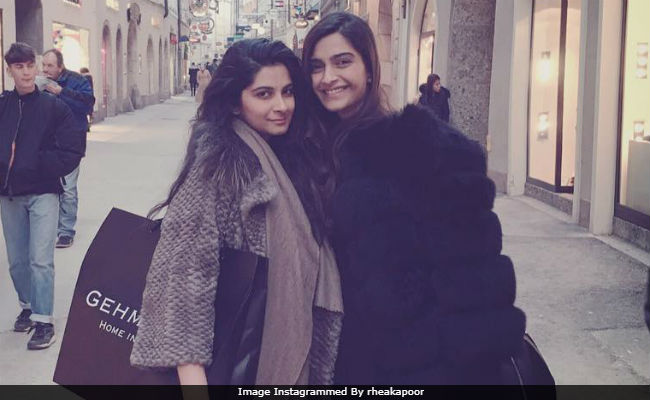 New Delhi: Newlywed Sonam Kapoor flew out to the French Riviera last night minus husband Anand Ahuja. Sonam will walk the Cannes red carpet tonight and on Tuesday. After boarding the flight, a 'super nervous' Sonam posted a cute message on her Instagram story for her sister Rhea, who also styles the actress for some of her major events, including Cannes. "It is the first Cannes I am going to without my sister. She has to release Veere Di Wedding. I miss you, Rhea and I am super nervous without you," Sonam says in the video. Veere Di Wedding is Sonam's forthcoming film with Kareena Kapoor, Swara Bhasker and Shikha Talsania, which Rhea is co-producing.

This is the video Sonam posted, now being shared widely on Instagram.

On Saturday night, Sonam and Anand touched down Delhi, his hometown. Sonam had posted some cute pictures from the flight with husband Anand Ahuja.

This picture was shared by Anand on his Instagram story.

Promoted
Listen to the latest songs, only on JioSaavn.com
Sonam Kapoor and businessman Anand Ahuja got married last Tuesday and the ceremony was followed with a starry wedding reception in the evening. Bollywood A-listers like the Bachchans, Shah Rukh Khan, Salman Khan, Akshay Kumar, Rekha, Alia Bhatt, Ranbir Kapoor, Ranveer Singh, Kareena Kapoor, Saif Ali Khan, Karisma Kapoor, Vidya Balan and several others were a part of the big bash.

Sonam will take over the Cannes duties from Aishwarya Rai Bachchan, who represented cosmetic giant L'Oreal at the film festival over the weekend. Deepika Padukone has already walked the red carpet on May 12 and May 13.