Cannes 2018: Sonam Kapoor And Anand Ahuja Share A Moment Before She Takes Off For The Croisette 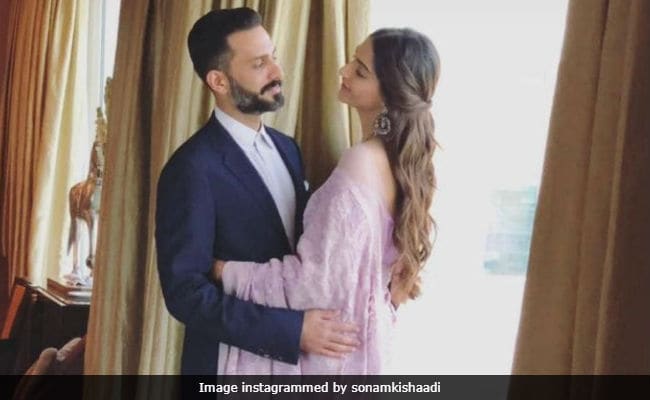 New Delhi: A photo of newly-weds Sonam Kapoor and Anand Ahuja looking into each other's eyes lovingly before she leaves for the Cannes Film Festival is going viral. The picture was originally shared by Anand Ahuja on his Instagram story and it was picked by fan clubs. Sonam Kapoor is dressed in a mauve embroidered saree while Anand Ahuja looked dashing in a navy blue suit. Sonam Kapoor is expected to make her first Cannes appearance of 2018 on May 14, for which she'll travel on Sunday. Sonam Kapoor is one of the three Indian L'Oreal brand ambassadors representing the cosmetics giant at the Croisette. Take a look at Mr and Mrs Ahuja's latest picture:

Too cute, these two.

Sonam Kapoor married longtime boyfriend Anand Ahuja as per Sikh traditions on May 8, which was followed by a grand reception. Bollywood's creme de la creme went on to be a part of Sonam and Anand's big day. Videos and pictures, showing celebrity guests of the Kappors and the Ahujas enjoying to the fullest, were circulated on social media for days.

Promoted
Listen to the latest songs, only on JioSaavn.com
Sonam Kapoor has a busy work schedule in May. She'll walk the Cannes red carpet on May 14 and May 15. This time Sonam will complete eight years at the French Riviera as L'Oreal's brand ambassador. After Cannes, Sonam will promote her new film Veere Di Wedding, which releases on June 1.