Can You Guess The Usual Suspect In Kartik Aaryan's Eid Selfie?

Here's a hint: She is one of Kartik Aaryan's co-stars 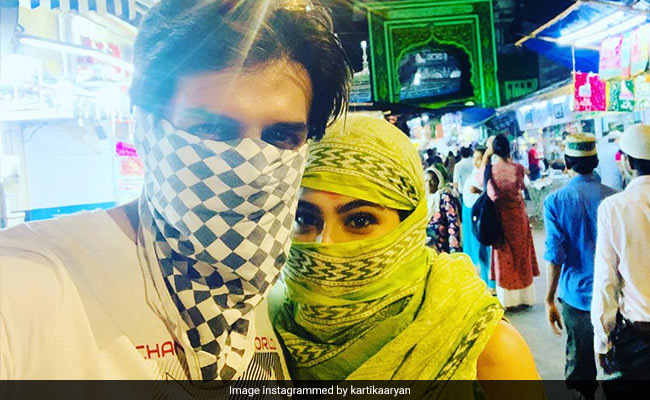 Hey folks! Its Eid today and celebrities have bombarded social media with wishes but it is Kartik Aaryan's festive greeting that impressed us the most. Unlike his contemporaries, Kartik ditched the conventional wishing style and it wouldn't be wrong to say that his festive greeting was a little hatke. Why, you ask? Well, for starters, it features Kartik's co-star Sara Ali Khan. Secondly, both Sara and Kartik can be seen hiding their faces with pieces of cloth. Kartik simply captioned the post, "Eid Mubarak" and left the guessing bit to his fans. Just like us, the actor's fans also loved the picture and the 9 lakh likes on the post are proof.

Earlier, on Wednesday, Sara Ali Khan wished her fans on social media by sharing a picture of herself along with her mother Amrita Singh and she captioned it: "Eid Mubaraq." The mother-daughter duo can be seen smiling with all their hearts in the picture.

Sara Ali Khan and Kartik Aaryan are co-stars in Imtiaz Ali's untitled film, which is said to be the remake of the 2009 film Love Aaj Kal, which featured Saif Ali Khan and Deepika Padukone in the lead roles.

Kartik Aaryan and Sara Ali Khan have been featuring in trends ever since Sara confessed on Karan Johar's talk show Koffee With Karan that she would love to date him and he responded saying that he wouldn't mind going out on a coffee date with Sara.