Boo... Guess Who This Is In Twinkle Khanna's Post

No, that's not a robber from the Money Heist series. 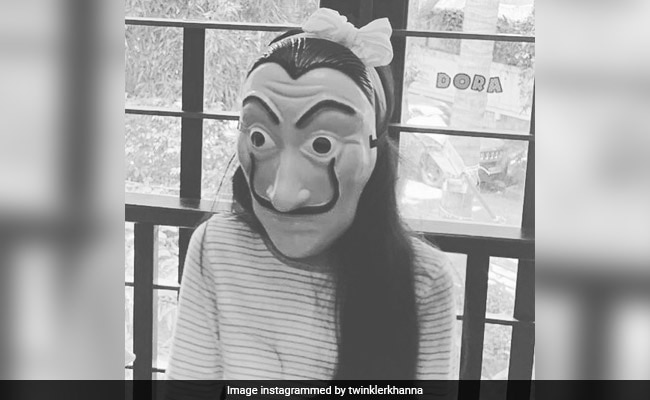 Twinkle Khanna's latest Instagram post may take you by surprise. No, that's not a robber from the Money Heist series, it is just Twinkle's daughter Nitara wearing a replica of the Salvador Deli masks, used by the robbers in the poplar Netflix show. Twinkle backed Nitara's picture in the Salvador Deli mask with this caption: "When you remove your mask and realise that this is in fact the new you. #MoochehotohNathulaljaisi" The mask Nitara opted for is a reference to Money Heist but the hashtag in Twinkle's caption references Amitabh Bachchan's popular dialogue from the 1984 film Sharaabi.

When you remove your mask and realise that this is in fact the new you. #MoochehotohNathulaljaisi

Twinkle Khanna, who is quite active on social media, frequently shares snippets from her life at home with her children Nitara and Aarav. Last week, she shared a picture of herself and Nitara, which was clicked by Aarav. She dozed off during her and Nitara's book reading/studying time and was for taking the picture the "Bhatia boy" was in trouble.

My son crept up and took this picture today. The little one and I were meant to be studying and reading together when I have fallen asleep with a pencil in my hand! Is it just me going through this peculiar phase where everyday around 4pm the brain just fogs up? #IWillGetYouForThisBhatiaBoy

She married Akshay Kumar, he co-star of International Khiladi and Zulmi, in 2001. Twinkle Khanna is now the best-selling author of three books - Mrs Funnybones, The Legend Of Lakshmi Prasad and Pyjamas Are Forgiving.