"Surrounded by make-up and hair stylist wearing PPE kits, this looks like a shot from a sci-fi film," wrote Satish Kaushik 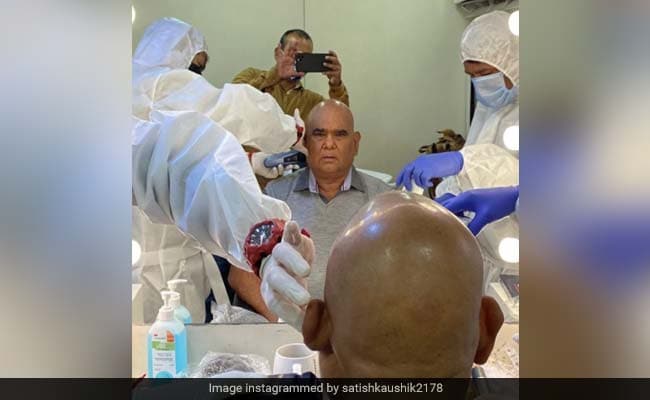 The show must go on, even in these dismal times. Unlockdown across the country has meant a return to work for several sectors, among them the film and TV industry. The COVID-19 pandemic halted production on several projects - also putting some ready-to-release films on hold and forcing others onto OTT platforms. The film and TV fraternity are now trickling back onto set and are having to adapt to an entirely new set of processes and protocols. In the words of actor Satish Kaushik, the sets now resemble something out of a "sci-fi film" - life imitating art in an ironic twist of fate.

There are any number of dystopian blockbusters with which to compare current working conditions, documented on social media by actors such as Amitabh Bachchan. Here's a roundup of the new normal for film and TV stars.

Amitabh Bachchan, currently busy shooting the upcoming season of Kaun Banega Crorepati, shared a picture of the "sea of blue" on set - PPE kits and masks are de rigeur.

Kareena Kapoor, who is pregnant, also resumed work. She shared a picture from her vanity van with a team of make-up artists giving final touches to her look. "Another day, another shoot... my warriors," she captioned the post and added the hashtag "#MyNewNormal." Kareena's upcoming film is Laal Singh Chaddha and she has signed up for several endorsements too.

Another day, another shoot... my warriors Missing you Poonie #TheNewNormal

Akshay Kumar, who is filming Bell Bottom with Lara Dutta and Huma Qureshi in London, shared the amended "lights, camera, action" instruction in a video. Lara Dutta posted from hair and makeup as did actor Satish Kaushik, who wrote: "Surrounded by make-up and hairstylist wearing PPE kits, this looks like a shot from a sci-fi film."

And it begins!!! I'm claiming one for the girls! . As a 42 year old female actor, in this Covid period, it feels AMAZING to be the first to be back on set of a big Bollywood film!! Thankyou @pooja_ent for creating a safe environment for us . #BellBottom @akshaykumar @ranjitmtewari @iamhumaq @_vaanikapoor_ @deepshikhadeshmukh @jackkybhagnani

Surrounded by Makeup & Hair stylist wearing PPE Kits,this looks like a shot from a sci-fi film. Started shooting after 5months with safety measures. Corona can't stop the zeal and passion for movies. We have to fight it with courage and safety measures. #lovemovies #loveacting

For Shilpa Shetty, it was "surreal" to be back at work while Preity Zinta experienced "mixed emotions" when she resumed shooting after staying home for six months.

The best way to make peace with any situation is to gradually adapt to the changes. So, after a 5-month hiatus, I shot for something special, an act for Ganesh Chaturthi as a humble dedication to all our frontline warriors. I wanted to do something special in my own way for the ones who have been working relentlessly to help curb the situation and restore normalcy with their best foot forward. So, all the necessary precautions were taken & all the guidelines met by the small team who made it happen. But, gotta say, I can't even begin to express how overwhelming it was to get back to it all - felt surreal. I sincerely hope & pray that our Vighnaharta, Lord Ganesh removes all the negativity, fear, and toxicity surrounding us. Take care of yourself and your loved ones. We owe it to all the brave warriors, who have put their lives on line for us. @cineyug @starplus . . . . . #NewNormal #FrontlineWarriors #special #BTS #SocialDistancing #gratitude #blessed #StarParivaarGaneshotsav

It's relieving and fun to get back to work after staying home for 6 months - It's also scary to be out there without a mask on your face all the time. So many mixed emotions - Fear, Excitement and Nervousness all rolled into one. Makes one appreciate a breath of fresh air and all simple things we took for granted in the past. #ProjectSanity #Shoot #Gratitude #ting @838mg @christinetirado_mua @vladimirsimic1 @styledbyambika

Back to Shoot after 3 months Back to normalcy ! #unlockindia

In May, the government of Maharashtra allowed resumption of shootings for films and television shows while issuing a list of directives to be followed during shooting activities. The guidelines require the cast and crew to regularly sanitize their hands, wear masks and gloves and follow social distancing norms.