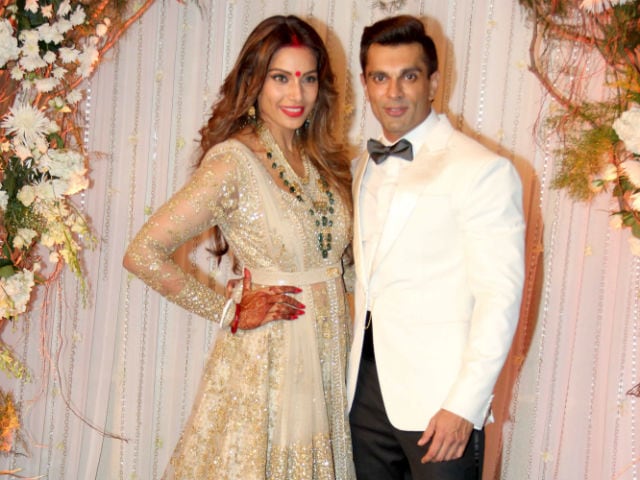 New Delhi: Actors Bipasha Basu and Karan Singh Grover got married at a suburban hotel in Mumbai on April 30 and we bring you some of the best moments from the couple's big day. The celebration was attended by celebrities, including Amitabh and Abhishek Bachchan, Aishwarya Rai Bachchan, Shah Rukh Khan, Salman Khan, Sonam Kapoor and Sushmita Sen.

After the wedding, Bipasha, 37, and Karan, 34, hosted a dinner party for their friends and colleagues from the film and television industry. Bipasha and Karan worked together in 2015's Alone.

In this video shared by the Instagram account snapbollywood, believed to be sourced from VJ Anusha Dandekar's Snapchat, Bipasha and Karan dance the night away on the floor. Stunning in a Sabyasachi anarkali suit, Bipasha's thumkas are to die for:

And then, it was time for the groom - Karan, who has also featured in television shows like Dill Mill Gaye and Qubool Hai, performed on the stage as Bipasha cheered for him.

Salman, who worked with Bipasha in No Entry, also spent some memorable moments with the newly weds:

Time for some cake:

Malaika Arora, Anusha Dandekar, Aditi Govitrikar, Sophie Choudry, Dia Mirza and Bipasha posed for a picture. Karan being the odd one out here:

Sushmita Sen also took a rocking selfie with the couple:

The coolest couple ever Congratulations @bipsluvurself@Iamksgofficial love u guys! #BipashaKaranWeddingpic.twitter.com/oO9UF0VSow

This is Bipasha's first marriage while it's the third for Karan. He was married to Saraswatichandra actress Jennifer Winget from 2012 to 2016 and actress Shraddha Nigam from 2008 to 2009.