In the clip, Shamita Shetty is seen sitting by the pool and weeping. 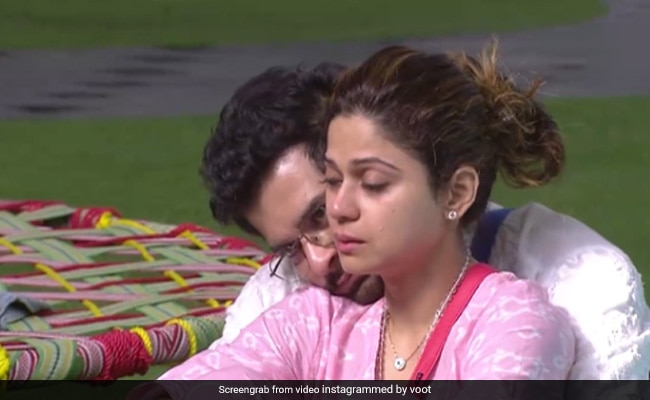 Shamita Shetty's stint in the Bigg Boss OTT so far has been anything but comfortable.  The actress has been at the centre of quite a few arguments and discords on the show and it appears that the incidents have begun to take a toll on her. In a video shared on Instagram by Voot, Bigg Boss OTT's streaming platform, Shamita Shetty is seen breaking down as she sits by the pool. Despite being consoled by co-contestant, singer Neha Bhasin, Shamita appears to be in a state of despair. Neha even tries to cheer Shamita up by saying that she manages to look pretty even while crying.

In the clip, Neha tells Shamita, "Bohot cheezein ho rahi hai aur ki jaa rahi hai jo ki sahi nahi hai. Roz ek cheez aise uthti hai. Main bhi kal bohot upset thi, neend bhi nahi aa rahi thi (A lot of things are happening and being done which are not right. Every day, there has been some  incident or the other. I was also upset yesterday. I couldn't sleep) and I also sat here and cried.”

Neha Bhasin adds that it is not possible for Shamita Shetty to change who she is, based on what the people on the show think of her. Similarly, the singer says, it is futile to think the people around will change. Neha goes on to add, with a hint of a smile, “Rote hue bhi sundar ho (You are beautiful even when you cry).”

To this, Shamita Shetty responds with a feeble smile. Soon, Raqesh Bapat, who was sitting on the other end of the pool, gets up and sits behind Shamita and hugs her. Raqesh is Shamita's "connection" in the house.

Shamita Shetty made her digital debut with the show Black Widows last year. Raqesh Bapat, on the other hand, is known for his work in TV shows such as Maryada: Lekin Kab Tak? and Qubool Hai.