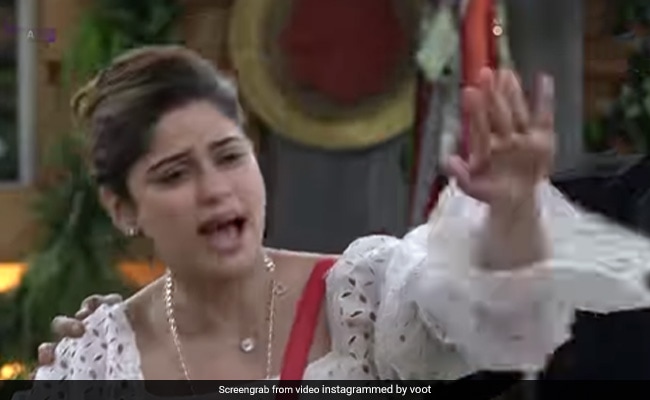 Shamita Shetty in a still from the show. (Image courtesy: voot)

Actress Shamita Shetty was seen crying after an argument with fellow contestant Nishant Bhat on the latest episode of Bigg Boss OTT. The contestants were taking part in a task when the fight broke out between the two. Shamita was seen performing a task with actor Raqesh Bapat when she and Nishant began to argue. In a clip shared on Instagram by Voot, the platform that is streaming the show, Shamita can be seen asking Nishant, “You like this task? You want to make people happy right?” Responding to an angry Shamita, Nishant said, “Why are you screaming? Do your task.”

Shamita, meanwhile, continues to address Nishant and asks him, “You like to make people happy, right? You want to make them laugh, na? ” To this, a visibly angry Nishant says, “Did you even hear what I said,” and asks her to talk in Hindi, which is the rule of the show.

Shamita then calls him a “snake”. Responding to this, Nishant says, “Gaali mat do. Agar aap gaali nahi sun sakte ho, toh do bhi mat (Don't use abusive language. If you do not like such words to be used against you, you don't use them either).”

She further adds that people in the house were not ready to even give her a chance. “The problem is there is a class divide here. Because I'm an actress. Because I come from a certain family. I am the one who is classy, I am the one who is this and that. I'm talking about the world giving me a chance, but people in the house don't give me a chance,” Shamita tells Raqesh amid tears, as he attempts to console her.

Previously, Shamita had also alleged that Nishant had “crossed the line” with her when they were acquaintances in the past. Though she did not divulge details about the incident in her conversation with co-contestant Divya Agarwal, she added that she had sternly told him off.

Bigg Boss OTT is a spin-off series of the show Bigg Boss. It is being hosted by director-producer Karan Johar.