Bigg Boss OTT: Shamita Shetty Breaks Down After Task, With Raqesh Bapat By Her Side

Seems like this happened after Moose Jattana poured water on Shamita’s head. 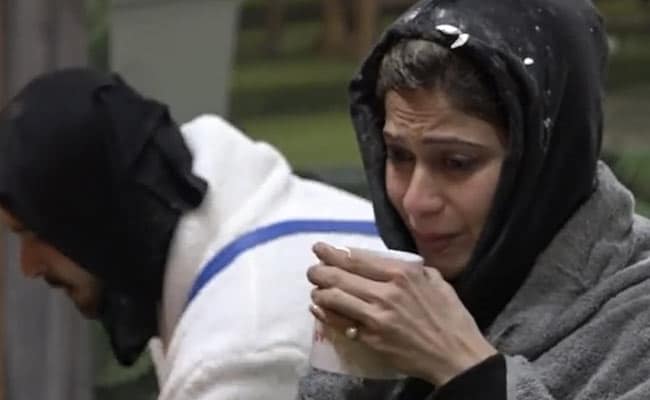 Another day, another task at Bigg Boss OTT. This time, the contestants were divided into two teams - Team Rasqesh Bapat and Team Pratik Sehajpal. The rules are simple - one team will maintain a statue-pose for a certain period of time and others will disturb them. From using green chillies to putting ice cubs, team members went all out. Actress Shamita Shetty and her “connection” Raqesh Bapat, as part of the task, were seen in a statue posture as Team Pratik tried to unfreeze them by emptying a bucket of water and applying ice packs. Taking a step further, Pratik broke some raw eggs on Shamita's forehead. But failed to unfreeze her.

Now, in a video shared by Voot on Instagram, we can see Shamita Shetty breaks down in tears as Raqesh Bapat consoles her. Seems like this happened after Moose Jattana poured water on Shamita's head. Wrapped in a towel, Shamita sips hot water as Raqesh tries to make her feel better. Soon after the video went viral, Shamita's fans came out in large numbers to support the actress.  “Don't cry...Full support for--Shamita Shetty,” wrote a user.

“Shamita, you are doing good,” wrote another. A third user said, “Stay strong, Shamu”. Some even cheered for Shamita Shetty and Raqesh Bapat's jodi.

Well, it's not just Shamita Shetty who had to go through all this during the task on Bigg Boss OTT. Divya Agarwal-Zeeshan Khan and Neha Bhasin- Milind Gaba, who were Team Raqesh, had a similar fate. During the task, there was a time when Divya lost her cool after Ridhima Pandit and Nishant Bhat pour antiseptic liquid on her head and as a result, it went into her eyes. An angry Divya can be heard saying, “Yeh kya dala hain...Aur kisne dala yeh...[What have you put on me? Who did this?]” Moments later when someone told Divya that it was Dettol she couldn't control her anger and pushed Ridhima and yelled at her.

After the task got over, Divya Agarwal and Pratik Sehajpal were spotted talking near the pool area about the incident. Divya spoke about how she left after liquid went into her eyes. “For two minutes it left like I have gone blind,” she said. Despite being on the opposite side, Pratik supported Divya on this matter.