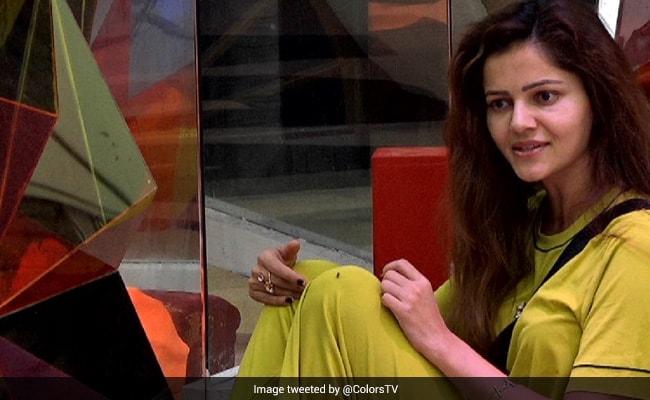 Bigg Boss 14: Rubina in a still from the show. (courtesy ColorsTV)

Tonight's episode of Bigg Boss 14 saw a drastic change in friends Rubina Dilaik and Jasmin Bhasin's relationship. Earlier in the day, Rubina and her husband Abhinav Shukla locked Nikki Tamboli in the bedroom after they caught her stealing her make-up products during the night. When Jasmin asked Rubina to let Nikki go, an angry Rubina said that Jasmine is "trying to demonise" the opposing team. "Tumko humko shaitan banana hi hai, demonise karna hi hai (If you want to make us look bad and demonise us), continue doing that," she added. Rubina later told Jasmin that her "sugar-coated" way of talking can also be considered a sign of being ill-mannered.

Rubina Dilaik and Jasmin Bhasin's war of words continued even after Nikki Tamboli managed to get out of the bedroom. Rubina called Jasmin "immature" for defending Nikki Tamboli. She also warned Jasmin not to talk about her behind her back. Jasmin too was furious and she told Rubina, "Play your clever games, like you always do, with someone else." Jasmin, cryptically hinting at her and Rubina's friendship, said, "it's over."

Jasmin and Rubina's equation wasn't the only one to suffer. The Shakti actress also got into a fight with her husband Abhinav Shukla. He shouted out at her saying, "Tere ko kya zaroorat thi bolne ki? Bas kar. Ispe na safaai toh dena hi matt (What was the need to say anything? Stop it. Don't even try to explain yourself about this)." Jasmin's team, which was in charge of the kitchen department, gave very little food to the opposing team and asked them to divide it among themselves, which made Rubina even more furious. She later asked captain Kavita Kaushik to intervene.