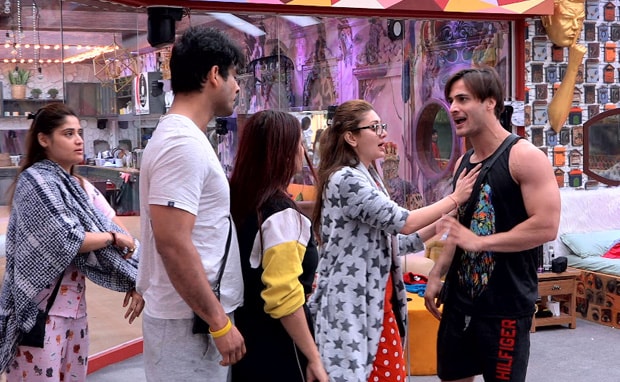 Bigg Boss 13 November 14 update: Siddharth Shukla and Asim Riaz in a still from the show.

Tonight's episode of the TV reality show Bigg Boss 13 was full of intense moments. Siddharth Shukla and Asim Riaz, who started out as friends in the beginning of the season, were seen arguing in tonight's episode. Asim labelled Siddharth as "authoritative" and complained that he doesn't listen to people's opinions. Asim's complains made Siddharth very furious and he said that he "doesn't care" about anybody's opinions. Siddharth and Asim got involved in another fight when Asim questioned Siddharth Shukla and Shehnaaz Gill's bond. After the fight, Shehnaz and Aarti discussed Asim's insecure behavior and they talked about how Sidharth and Shehnaaz's friendship is affecting him big time.

Bigg Boss reprimanded the contestants in tonight's episode as several contestants were found sleeping during the day. Bigg Boss immediately played the alarm and called out the contestants. As a consequence of the inmates' actions, Bigg Boss decided to punish them by calling off this week's captaincy task.

In another segment of the show, Bigg Boss announced this week's luxury task, wherein the housemates were divided into two teams- Team A, which comprised Sidharth, Shefali Zariwala, Arhaan Khan, Shehnaaz Gill, Himanshi Khurana and Vikas. Team B counted Paras, Devoleena, Rashami, Vishal, Khesari, Mahira and Aarti among its members. Two house-shaped frames were placed in the garden area and as a part of the task, the contestants had to fill the frame by colors the paper sheets on the table. The team whose house was complete was to win the luxury budget. During the task, both the teams tried destroying the papers in order to win. Shehnaaz Gill, who has quite a bit of a reputation as an impulsive contestant, attacked the opposite team's house aggressively.

It will be interesting to see which team will win the luxury budget task in tomorrow's episode.