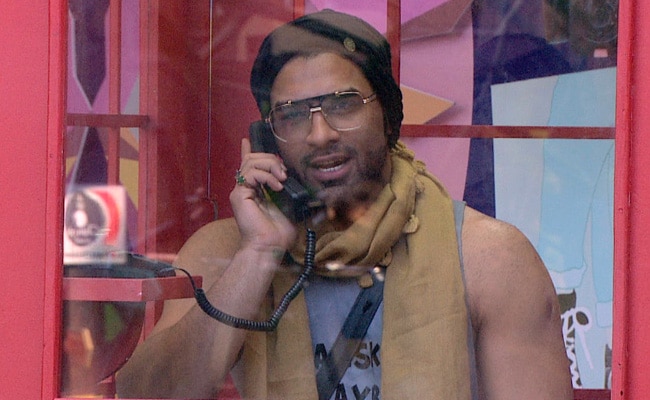 Bigg Boss 13: Paras Chhabra in a still from the show.

Tonight's episode of Bigg Boss 13was full of surprises. Bigg Boss added a twist to the usual nominations drill which takes place on Mondays. Siddharth Shukla and Shehnaaz Gill were already nominated as they were punished by Bigg Boss. Shefali Zariwala, who was the captain for the week, was safe from nominations and she also had a special power of nominating a contestant for this week's eviction. Shefali nominated Devoleena Bhattacharjee. The contestants woke up to the tunes of the song Dil Ka Telephone from the film Dream Girl, giving them a hint of what's in store for them. As a apart of the BB PCO task, two phone booths were set up in the garden area. As a part of the task, two contestants had to talk for 15 minutes and they had to convince their opponents to give up on the conversation and put the phone down. The contestant to hang up first would be nominated and in case none of the contestants disconnected the call after 15 mins, both of them were to be nominated.

During the task, friends Rashami Desai and Paras Chhabra were paired against each other during the task. Paras set a perfect example of friendship and saved Rashami by hanging up the phone first. Other contestants failed to hang up the phone within 15 minutes, as a result of which they were nominated. Arhaan Khan referred to Asim Riaz as "Siddharth Shukla's shadow," which did not go down well with Asim.

In another segment of the show, Shehnaaz Gill and Siddharth Shukla reconciled. During the night, Shehnaaz tried to place flowers and a show piece on his bedside table. Sidharth, who was quick to notices Shehnaz's gesture, pulled her towards himself and hugged her.

After the nominations process, Bigg Boss asked the housemates to pick any two contestants that they thought don't take the game seriously and need to be woken up from their sleep. The inmates unanimously picked Khesari Lal Yadav and Himanshi. As a punishment, Bigg Boss announced that the aforementioned contestants had to remain awake till his next command.