Bigg Boss Season 13 November 6 Update: Siddharth Shukla forcefully snatched a sack from Mahira's hand, after which she fell on the floor 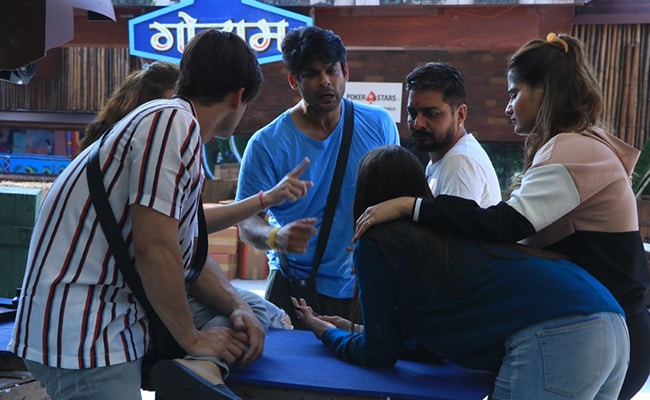 Wednesday's episode of Bigg Boss 13 was all about drama. The episode began with continuation of the 'Bigg Boss Transportation Task', during which Sidharth Shukla hurt Mahira Sharma in his attempt to snatch a sack from her. Furious over Sidharth's aggressive behaviour, Mahira lost her cool and continued to yell at Asim's team (Sidharth, Aarti, Vikas and Himanshi). Mahira also hurled boxes at Asim, who tried to remain calm when Aarti told him not to leave the task at any cost. After a while, Mahira broke down in tears while Paras Chhabra attempted to pacify her but she continued to yell.

Later, Bigg Boss asked to contestants to gather in the common room - an order which Shehnaaz refused to abide by. Bigg Boss then reprimanded Sidharth Shukla for being violent towards his fellow contestants on the show and as punishment, nominated him for two weeks straight. Sana was also punished for not listening to Bigg Boss and was nominated for a week. Sidharth Shukla was also given a stern warning by Bigg Boss. However, Shehnaaz continued to cry through the day saying she's done with the show and that she wants to leave the house.

The episode shifted to the next day in the Bigg Boss 13 house, which was also filled with fights and altercations. Sidharth Shukla and Paras Chhabra continued to have war of words and threats, poking fun at each other's careers.

Meanwhile, the housemates have a fight over the kitchen ration in the house. Aarti blamed Paras and Asim for not managing the ration well, which lead to an ugly fight between Aarti and Asim, who tried to explain someone must have hidden the ration or kept it back. A furious Asim also said that the Bigg Boss 13 house now needs a new captain instead of Aarti.

Then it was time for the next leg of the 'Bigg Boss Transportation Task' when Paras suggested that Vikas Pathak be the next captain of the house. Vikas, on the other hand, questioned Shehnaaz over her equation with Himanshi, which ended into yet another heated exchange.