Bigg Boss 13: This is Salman Khan's tenth season as the show's host 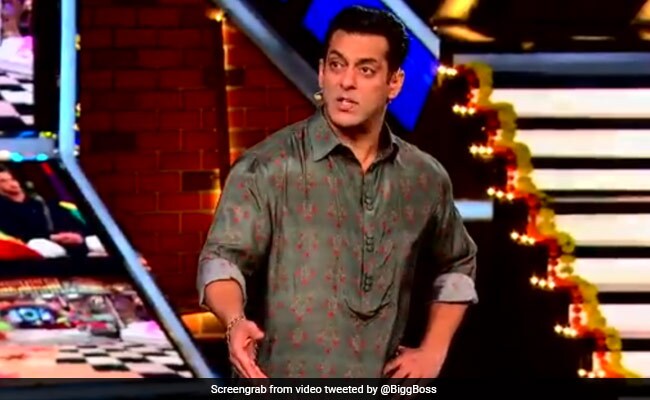 Bigg Boss 13: Salman Khan in a still from the show. (Image courtesy: BiggBoss)

Salman Khan occupied the top spot on Twitter's list of trends on Sunday and not in a good way this time. The 53-year-old actor, who hosts the current season of the television reality show Bigg Boss, has offended some on social media. The hashtag #BiasedHostSalmanKhan has trended all day. For the uninitiated, Salman Khan supported Bigg Boss contestant Siddharth Shukla on Saturday's Weekend Ka Vaar episode, which didn't go down well with a section of the Internet.

Salman, who interacts with the contestants during the weekend, discussed the first captaincy task - 'Bigg Boss Transportation Services,' as a part of which Siddharth Shukla got aggressive and snatched a sack from fellow contestant Mahira Sharma's hands, who fell down during the process. In Saturday's episode, Salman asked Mahira Sharma if she would "have done the same, or left the task?" He also mentioned that Siddharth Shukla is not the only contestant in the house who resorts to aggressive means.

In another segment of the show, Salman Khan also called out most of the contestants, including Mahira, for targeting Sidharth. When Mahira started crying over her fight with Sidharth Shukla, Salman Khan said,"Yeh nautanki mere samne mat kia karo."

Several fans sided with Mahira and labelled Salman Khan as a "biased host." Take a look at some of the tweets here:

This Twitter user was not pleased with Salman Khan's reply.

The way with which Mahira put forward her points-they always are valid and clear.
She puts forward unbiased points.
Just b'coz its #biasedhostsalmankhan listening to it he'll never understand or agree to them#IStandByMahira for being firm with her thoughts even against biasness pic.twitter.com/czsXMbkA6R

I think it's better Salman himself comes as a wildcard contestant!

Rather than supporting Shukla on weekends he could support him every day by being part of the house!#biasedhostsalmankhan@BeingSalmanKhan

Gauhar Khan, who won the 7th season of Bigg Boss , tweeted: "I'm shocked. I am probably watching a different Bigg Boss. Aggression is justified by all means."

In response to #BiasedHostSalmanKhan, several Twitter users came up with a series of #BestHostSalmanKhan tweets. Check out some tweets here:

he don't need @BiggBoss but Bigg Boss need him #BestHostSalmanKhanpic.twitter.com/PcqQ0hOwSW

We love you Bhai #BestHostSalmanKhanpic.twitter.com/qa4vrUHkjd

His expressions are enough. Salman Khan doesn't have to speak out everything in order to make the contestants realize that they are doing something wrong or right.#BestHostSalmanKhanpic.twitter.com/FwMqkDPx64

This is Salman Khan's tenth season as the show's host. Other than Salman Khan, stars like Amitabh Bachchan, Shilpa Shetty and Arshad Warsi have hosted the show.