Bigg Boss 13: Siddharth Shukla was called out by Bigg Boss for his aggressive behaviour during the task 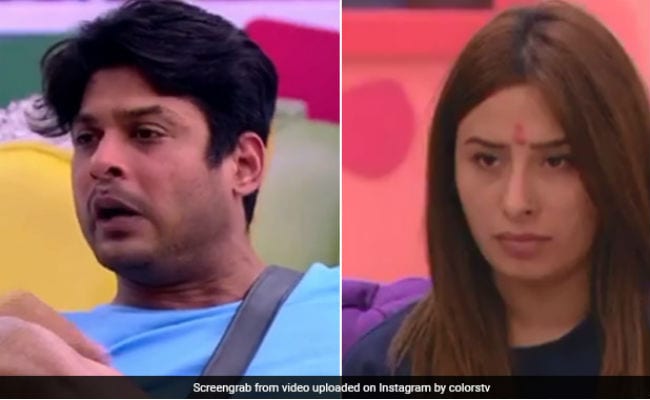 Tuesday's episode of the TV reality show Bigg Boss 13 was full of drama. The first captaincy task - 'Bigg Boss Transportation Services' brought out the worst in all the contestants. During the task, TV actor Siddharth Shukla got aggressive and he snatched a sack from fellow contestant Mahira Sharma's hands, who fell down during the process. Bigg Boss reprimanded Siddharth for his aggressive behavior and he is yet to announce the punishment. While Bigg Boss' decision is awaited, Twitter is busy debating. A section of the Internet defended Siddharth Shukla's moves, claiming that Mahira "provoked" him, which is why the actor behaved the way he did, while others argued that Mahira was being targeted for "no reason."

A Twitter user felt that Mahira was being targeted for "no reason" and said that the show's host Salman Khan should intervene in the matter.

I damn sure tht #shukla is psyco how can someone be so aggressive thn him & targeting #MahiraSharma for no reason i think @BeingSalmanKhan should stand up for this bcz he is attackng a women in nationaltv seriously..?

Another Twitter user supported Mahira and thought that Siddharth was "unnecessarily poking" her.

#BiggBoss13 Honestly I did not like #SiddhartShukla in todays episode. I could see he was unnecessarily poking #MahiraSharma. It was not logical

Here are some more Twitter users who shared a similar school of thought :

#SiddharthShukla is making no sense in the conversation with #MahiraSharma tonight.
She was so polite while asking him to cut vegetables..
She was actually requesting him..
Literally
Why shukla unnecessarily taunting & fighting with mahira #BigBoss13@BiggBoss

The Balika Vadhu actor's fans started a series of #WeSupportSidShukla tweets, as a part of which, they extended their support to him.

What #MahiraSharma is doing she is provoking #SidhartShukla & showing him her shoes.
What is this? #ShehnazGill this girl is now showing her real face.. Big claps to her pic.twitter.com/gJzbOhVJUF

Another Twitter user thought that the actor was equally adept at performing well in the task.

#SidhartShukla was bang on in the task and he was standing in between.

RT if you have got that too#WeSupportSidShukla@OfficialSidFC@sidharth_shukla

We love and support Sid, BB13 please be rational in your decision. #wesupportsidhuklapic.twitter.com/Z7SxNSMw5U

As a part of the 'Bigg Boss Transportation Services' task, the housemates were divided into two teams, which were led by Asim Riaz and Paras Chhabra. Siddharth, Aarti, Vikas and Himanshi were part of Asim's team, while Arhaan, Khesari, Tehseen, Mahira and Shehnaaz were their opponents. The teams were asked to collect stock from the garden area. Both the teams had to load their sock in the truck and the team with the maximum stock would win the task. During the task, Siddharth Shukla forcefully snatched a sack from Mahira's hand and she fell on the floor.

Mahira Sharma or Siddharth Shukla, whose side are you on? Tell us using the comments section below.