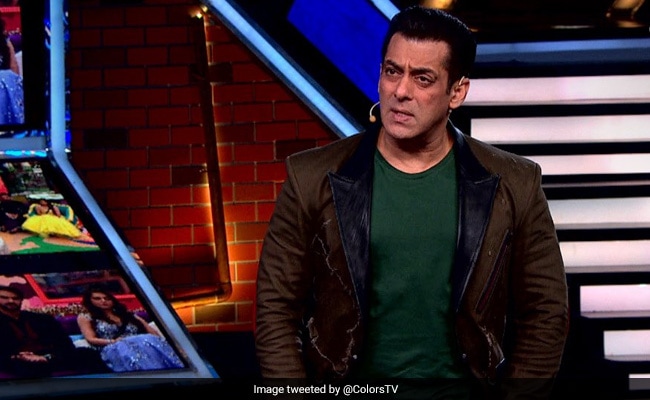 Bigg Boss 13: Salman Khan on the sets of the show. (Image courtesy: ColorsTV)

Superstar Salman Khan is furious with Bigg Boss 13 contestant Shehnaaz Gill's behaviour. In fact, he is so annoyed with her that he taunted her, asking if she had actually started thinking of herself as Katrina Kaif! Shehnaaz had introduced herself as "Punjab ki Katrina Kaif" on the stage. In fact, Salman also used to call her the same during the weekend episodes but her behaviour has disappointed him. On Sunday's episode of Bigg Boss 13, Salman was seen losing his cool at Shehnaaz over her dramatic reaction to being called jealous. She started throwing tantrums in front of Salman and even accused Salman of betraying her while crying and sitting on the floor.

First, Salman warned her not to continue the drama in front of him as he behaved quite respectfully with her and he expected the same in return. She asked the host to let her go as she doesn't want to stay inside the house anymore. Salman then asked Shehnaaz to stop all the drama. Irked, he even asked the makers to open the gates and let her go. After the whole drama, Shehnaaz storms out of the living area while crying and sits outside throughout the episode.

Now, on Monday, Salman will be seen entering the house to celebrate the success of the show with the housemates. He will be first seen ignoring her and walking past her into the living area.

In the preview promo, released by the channel, when Sidharth goes out to convince Shehnaaz to come in and Shehnaaz again refused to listen, Salman will seen calling Sidharth inside.

Salman asked him to let Shehnaaz be out. He gets angry and is seen saying that "badtameezi ki jagah nahi hai iss ghar mein (there's no place for misbehaviour)."

In another clip, Salman is seen lashing out at Shehnaaz saying she is not a two-year-old and even taunts her that she has started behaving like a star because people have started recognising her ("chaar log janane kya lag gaye khud ko Katrina Kaif samjhne lagi").

Shehnaaz later realises her fault and is seen apologising to Salman but he doesn't pay heed to her.