"You are all invited in the Shok Sabha of HinaKhan's Pooh," writes one user 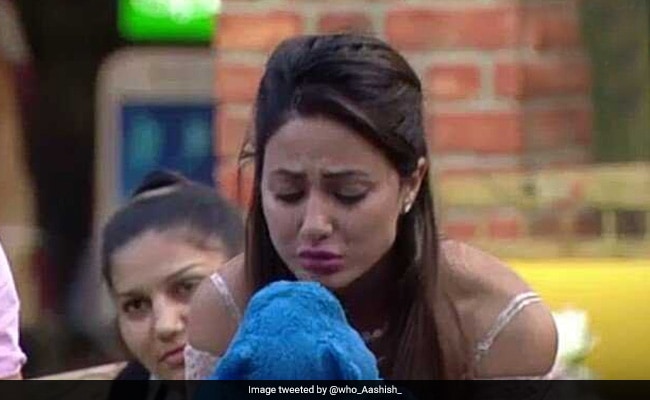 New Delhi: Television actress Hina Khan, who is currently seen in Bigg Boss 11, is getting a bit unpopular with the Internet, especially after her overdramatic sacrifice, in which she dipped her eight-year-old soft toy 'Pooh' to save her friend Luv Tyagi (another contestant of Bigg Boss 11) from the nominations. In Bigg Boss' recent episode, we saw that the gharwale sacrificed their personal stuff to save their friends from the nominations. Because, Luv had applied a mehendi tattoo of 'ZERO' on his forehead to protect Hina from the nomiantions, Hina too decided to go ahead and destroy her favourite toy. The Yeh Rishta Kya Kehlata Hai actress got too emotional while sacrificing the soft toy, which had been with her for last eight years, and broke down into tears. And this gave Twitter another reason to troll her.

"RIP Hina ka Pooh. To alll fans of #ShilpaShinde #VikasGupta #ArshiKhan #AkashDadlani #HitenTejwani you are all invited in the Shok Sabha of #HinaKhan 's Pooh," wrote one user while the others tagged Hina as 'drama queen' and said that pooh is an inspiration for the youth and an example of how he sacrificed his life for his owner's friend.

Here's a sample of the Internet's hilarious tweets:

RIP Hina ka Pooh
To alll fans of #ShilpaShinde#VikasGupta#ArshiKhan#AkashDadlani#HitenTejwani u r all invited in the Shok Sabha of #HinaKhan 's Pooh
Plz give ur 2 min Condolence to Pooh Pooh we will miss u #BB11#BiggBoss#BigBoss11
Venue: Hina Khan Fandom pic.twitter.com/OFtHceBu7d

Few images exclusively from funeral ceremony of our most beloved
"Pooh"
May it rest in peace.

Pooh's 1st Reaction
" I'm not DEAD, THAT ONE IS FAKE . #HinaKhan made promise to keep My Look-Alike Safe & Secure Till End.. She Failed .. I'm leaving once she is back from @BiggBoss " #BiggBoss11#BiggBoss#BB11pic.twitter.com/OG0Ijreqob

This brave soldier hs sacrificed his life for #LuvTyagi ..a grand salute to miss #HinaKhan ..india is proud to have daughter like her.. Who cn sacrifice her soft toy for her frnd..
1 retweet 7 topo ki salami to pooh#bb11#BiggBoss11#BiggBoss#BB11pic.twitter.com/NfJ4Egjc3f

Hina Khan was earlier trolled for her harsh attitude towards wild card entrant Dhinchak Pooja and her behaviour towards Akash Dadlani. Of this, Twitter tagged Hina as the "most irritating and hypocrite member of the house."

Here's a sample of the Internet's fury.

#HinaKhan Most irritating and hypocrite member of the house. #BiggBoss11#BB11

Hina Khan was even slammed by actress Gauahar Khan for her vile comment on contestant Arshi Khan. This is what Gauahar posted on Twitter:

Hina Khan is losing fans on Twitter but will she realise this before it is too late?

Promoted
Listen to the latest songs, only on JioSaavn.com
As of now Hina Khan, Benafsha Soonawalla and Sapna Choudhary are nominated for eviction for the upcoming week's process. Host Salman Khan will take up this week's issues in Weekend Ka Vaar episode on Saturday.