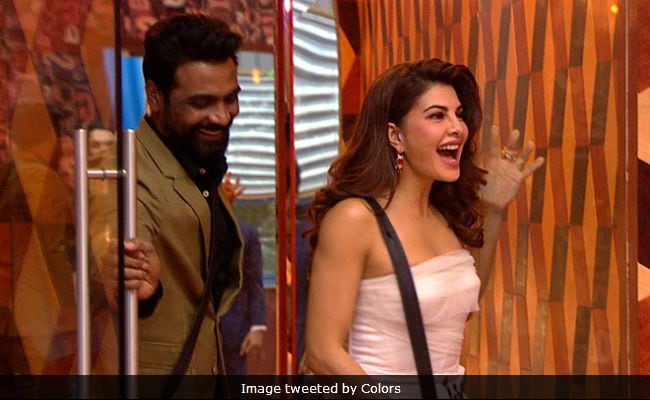 Bigg Boss 11: A still from the show. (Image courtesy: Colors)

New Delhi: Bigg Boss 11's Weekend Ka Vaar episode began on an emotional note. Shilpa Shinde or Arshi Khan's Shilma was upset with Arshi for being sweet to Akash Dadlani, who insulted the duo in past few days. Arshi being close to Shilpa had an emotional breakdown, which was another issue taken up by host Salman Khan in Sunday's episode. Our favourite host and dost Salman never fails to elate Bigg Boss' fans and came up with an interesting task for the housemates. The gharwale were paired up in jodis. With every yes from the female partner, the male partner had to pour in ice cold water into their pants and Hina Khan took all the advantage, who was paired up with Vikas Gupta.

Puneesh Sharma seems to be struggling with the cold in this game. Catch all the laughter and games only on #WeekendKaVaar. pic.twitter.com/A3sO0MsuqW

.@eyehinakhan takes full advantage of this situation as @lostboy54 feels the cold. Tune in to #WeekendKaVaar now! pic.twitter.com/Pd7z026M0n

Bigg Boss' stage was lit with Salman Khan's upcoming film Race 3's team. Director Remo D'Souza was accompanied by actors Jacqueline Fernandez, Daisy Shah and Bobby Deol. Remo and Jacqueline went inside the house with a fun task for the gharwale. Shilpa and Hiten Tejwani grooved to the beats of Tooh while Sapna Chaudhary and Priyank Sharma's dance moves were off the charts. How can we miss the signature step when Remo's in the house.

Promoted
Listen to the latest songs, only on JioSaavn.com
Now, rapper Akash's hit Bigg Boss theme song has Remo's signature steps. This week's elimination had a big twist. The three nominated contestants - Priyank, Hina and Sapna were asked to sit on revolving chairs. And Sapna Chaudhary left the house and got evicted.

The three nominated housemates take part in a new elimination process. Who will be out? Keep watching #BB11. #WeekendKaVaarpic.twitter.com/4Vk6vx5dqf

Who do you think will be nominated next week? Tell us in the comment section below.