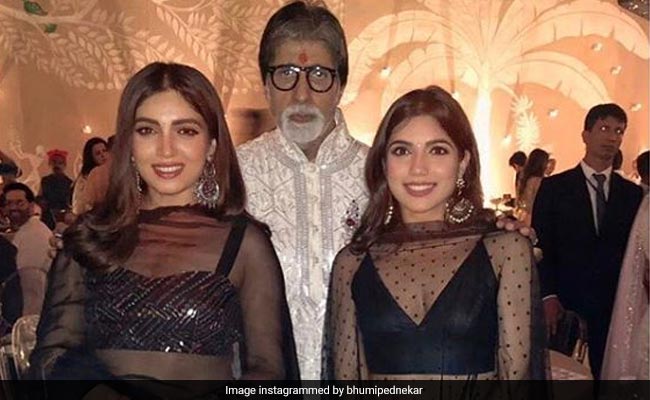 Big B with Bhumi and Samiksha Pednekar. ( courtesy: bhumipednekar)

Amitabh Bachchan's social media is generally a delight, as are the comments thread on his posts. At 77, Big B is still game - not only is he one of the hardest working actors around, he's also tops the social media leaderboard. There are times, however, when he struggles with Internet terminology, millennial lingo or just casual slang. Of late, he's been wrestling with the word "baller," thrown his way by actress Bhumi Pednekar, who is 30. On his latest Instagram entry, Bhumi commented, "44 years later and still giving us memorable characters.... I'm telling you, you're the most baller person ever." A curious Big B replied to her comment and wrote: "Bhumi, what is baller? Kab se pucch raha hun, koi bata hi nahi raha." 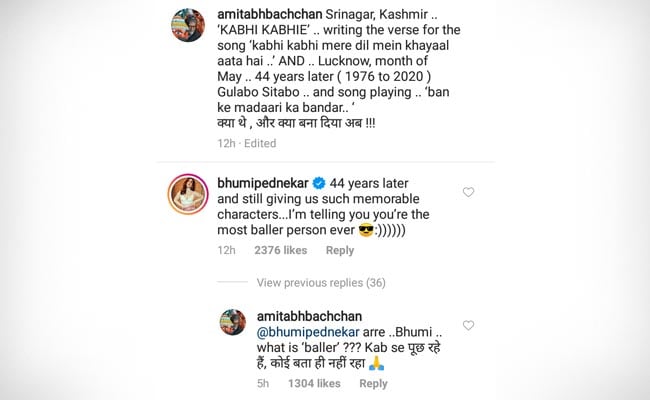 "Baller" is a superlative, an informal way to describe something or someone as excellent or impressive. Bhumi first dropped the "B" word on Big B's workout post, featuring his grandson Agastya Nanda. "You're a baller, Sir," Bhumi commented. Take a look at the post here:

Amitabh Bachchan does his best to keep up. He recently revealed that he came up with abbreviations way before millennials did - K3G, which is the shorthand for his film Kabhi Khushi Kabhie Gham, was apparently Big B's invention. He also offered a condensed form of the title of his next film, Gulabo Sitabo, co-starring Ayushmann Khurrana. "New gen/next gen use abbreviation, converse... LOL, ROTL, GOAT etc. I had devised K3G .. for Kabhi Khushi Kabhie Gham and it stuck. Next in line Gulabo Sitabo. So, GiBoSiBo, GiBoSiBo Cool na ..? CAC ! Cool as cat," Big B tweeted.

Amitabh Bachchan's last release was 2019 thriller Badla, co-starring Taapsee Pannu. The actor's upcoming projects include Ayan Mukerji's Brahmastra, co-starring Alia Bhatt and Ranbir Kapoor, and Chehre, alongside Emraan Hashmi. He will also be seen in the sports drama Jhund. Big B awaits the release of Gulabo Sitabo, co-starring Ayushmann Khurrana. The film is slated to release on Amazon Prime on June 12.